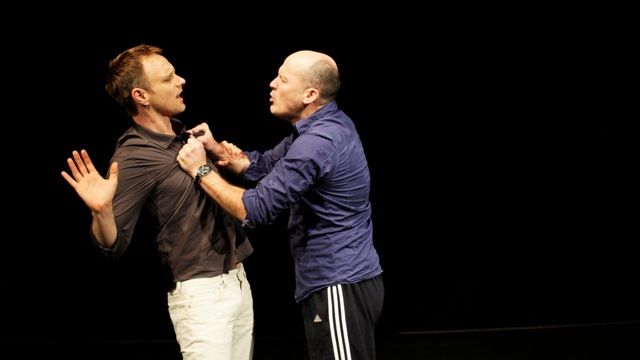 For Simon, a convicted child killer at the age of ten, it means now as an adult the details of his past must be locked away, hidden and almost wiped from existence. This would be fine if it were not for the fact that pressure from his wife to have a baby and questions about his past keep forcing them to the surface. The only place where Simon is free to talk is on the squash court with his therapist. It is here where we learn more about his past and the difficulties of keeping it in the dark.

Without revealing too much, Simon’s worlds collide in a spectacular way resulting in yet another life changing and harrowing shift.

Although I thoroughly enjoyed this production it’s largely due to the strength of the story and the beauty of the play’s structure. But the simplicity of Stephen Curtis’ design along with Verity Hampson’s lighting and Jeremy Silver’s sound also combine to add a richness to this show. 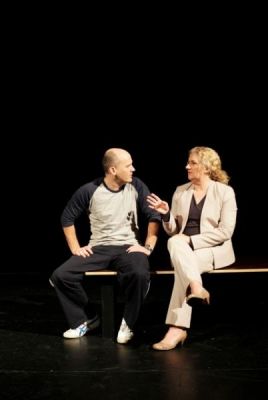 However, I am not overly convinced that this was the right cast for this particular play. I find this hard to say because I know that all of the actors in this show are very fine indeed - my view is not a matter of craft, more of miscasting. I feel similarly about the direction. It is obvious that Tim Jones has a lot of passion for this story, but I truly believe that it would have been better realised in the hands of another director.

Despite this I applaud Tim Jones, The Seymour Centre and Riverside Productions for having the temerity and gumption to independently stage a play as gutsy as this and of course a new Australian work at that!

This is the kind of new Australian work that several leading theatre companies in Sydney should be staging, but instead they keep bleating on about their deep commitment to fostering Australian playwrights and yet what do we get? Just more dressed up Chekhov, Lorca and bloody Bulgakov.