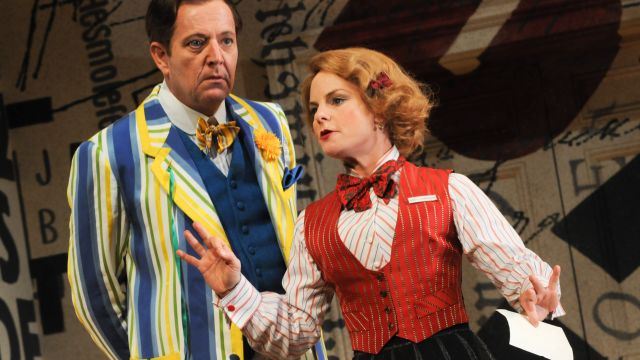 Tom Stoppard’s fertile 1974 play Travesties explores the unreliable memoirs of Henry Carr, a minor English consul officer, who recalls his time spent burning the midnight oil in heated discussions with three famous radicals in Zurich in 1918. These three radicals were each engaged in revolutionary activity; James Joyce in literature, Tristan Tzara in art and Vladimir Lenin in political philosophy. With Travesties Stoppard sets up a great debate - what kind of a role can the creative arts play in changing society?
Richard Cottrell’s fine production made the most of this rich work. The tone of the evening set straight away with the Salvador Dali-like safety curtain.
The cast reveled in Stoppard’s high-energy philosophical farce, stepping in an out of mirroring roles in The Importance of Being Earnest.
Jonathon Biggins, looking the part in a dapper yellow, black and blue stripped jacket, was perfectly cast in the leading role of Henry Carr, a rather precious, opinionated public servant who finds himself excitedly centre stage with a few of the icons of his generation.
Carr has an opinion on each of them. Toby Schmitz was great as Tristan Tzara, who Carr described as ‘an overexcited little man with a need for self-expression far beyond his natural gifts’. Peter Houghton was fiery as James Joyce, ‘that Irish lout’. William Zappa was intense as the ‘humourless’ Vladimir Lenin.
David Kary