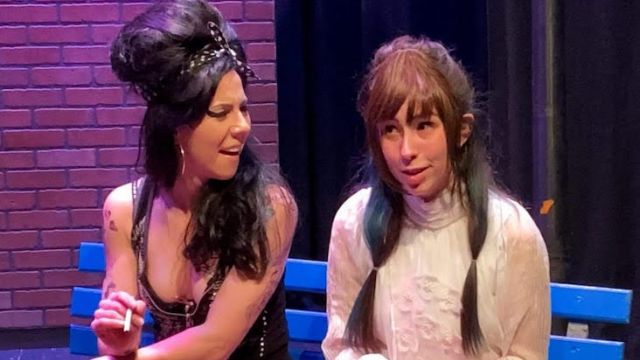 All three plays are the brainchild of playwright Deena M.P. Ronayne. Dealing with hard to talk about topics can be challenging but most important. Theatre is a wonderful medium as it evokes thought and educates the audience. Ronayne is successful in doing both.

Using the talents of Aberdeen Community Theatre to cast the three plays was a bonus, as each instalment was filled with layered acting and tight production values.

Seeking Dignity was directed by Brian T. Shultz. Although he was dealing with the topic of child abuse, he managed to give the abuser some depth as he struggled with the memories of his abuse. By the end of the play Darnell (Kane Anderson) was forced to come to terms with his actions through the help of a friend (Paige Walth-Tiede), a childhood neighbour who had witnessed the atrocities.

Shultz also directed Close to Black, a two hander bringing to life two singers who had passed on and were lingering at the ‘Pearly Gates’. Michelle Schaunaman brought to life Amy Winehouse and Julia Friedrichsen played Karen Carpenter. Each were given a voice beyond the grave. Each conveyed a sadness as they talked about the pressures of eating disorders and alcoholism. It was a moving portrayal and kudos must be given to the writer.

Tango-Ed Web was a lovely way to finish. A comedy with sinister undertones, wonderfully acted by Jason Honerman as the suitor, Emily S. Davis as the widow and the cursing bee, hilariously brought to life by Curt Campbell. A funny script highlighting honesty, instincts and learning to trust yourself.

In times when the theatrical world has come to a standstill, it is so important to find other realms to showcase the arts. Each play was filmed with excellent audio allowing for viewing pleasure. Sets were of the highest standard and musical interludes were used well. I highly recommend this series of plays and hope that they gain a wider audience. Kudos to all involved.