The Triumph of Man: A Comedy in Two Acts 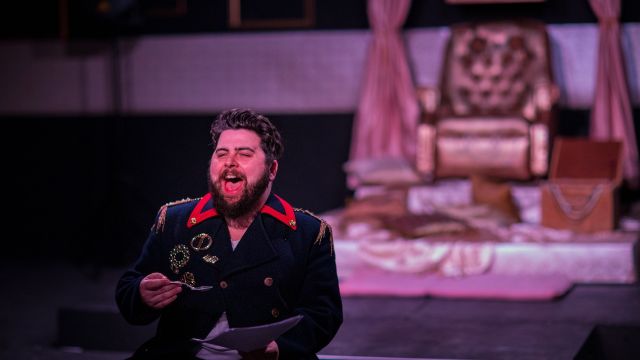 RUMPUS was founded in 2019 as a response to the perceived lack of a thriving second tier theatre industry.  The intimate and unadorned RUMPUS space provides artists with opportunities to create and perform new work at varying levels of development.  Groups of mostly emerging theatre-makers present experimental and new work that is invigorating the arts scene in Adelaide and laying excellent foundations for the future of theatre.  With the support of RUMPUS and Replay Creative, plus SA Government and Helmpann Academy funding, Paper Mouth Theatre and playwright James Watson are premiering a new work this week with a fine cast and truly superb direction by Mary Angley.

With The Triumph of Man: A Comedy in Two Acts, James Watson has written a dark comedy containing pointed truths, exploration of art versus censorship, propaganda and media, and their relationship to power and those in power.  All of which is a stark reminder of the world we currently reside in where corporate and media giants have opportunities to influence governments and peddle half-truths to the populace, or at least to those who choose to heed them.  Watson, a graduate of Flinders University’s creative writing degree and currently completing a Masters in Writing for Performance at NIDA, has created a fictional realm where a despotic dictator rules absolutely, disappearances, torture and executions are commonplace, and any rebellion is shut down quickly and violently. 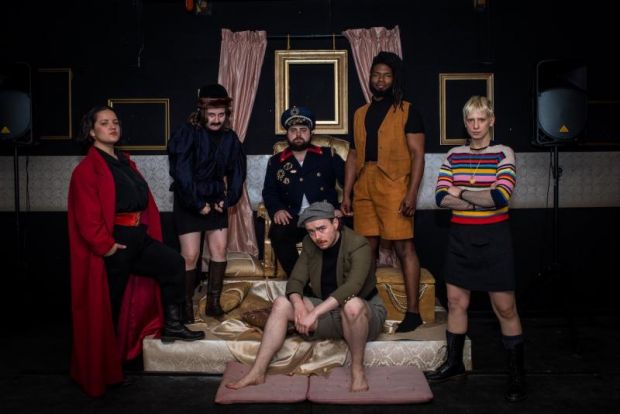 Watson’s writing is mostly well crafted, shifting from heightened, verbose farce to gritty philosophy to gentle conversational ribbing to proclamatory, indulgent ramblings befitting certain characters.  The farcical humour also contrasts with darker, tense moments of comedy that make you snigger in recognition of an uncomfortable truth, including comments on the craft of acting and the nature of theatre itself.  The play runs for two and a half hours with interval but moves along at a decent pace, aided by the quality of the acting and direction.  It might conceivably be edited to be a slightly shorter, tighter version, but it was not a chore to sit through.

The episodic action of the play occurs mostly on one level with the audience on two sides of the black box space (also on the same level as the performers), and facing each other across the long, processional stage area.  At one end a raised dais supports a throne of sorts, a painted recliner-rocker with a squeaky action that provides a few gently comedic moments as the sound punctuates the dialogue.  There is also a liberal scattering of satin cushions and (empty) gilt frames on the wall, the cushions possessing a special aesthetic utility as explained in the narrative.  The long performance area is used to excellent effect for General Ferdinand’s striding and posturing and for other beautifully choreographed physical scenes.

In addition to his usual megalomaniac activities, Ferdinand fancies himself a writer and has two ‘foreign’ actors abducted then coerced to perform in his first play.  The thinly veiled propaganda and his truly awful writing is a treatise that basically proclaims ‘how good is General Ferdinand’.  As well as witnessing the two actors working on the General’s play, various sub plots are revealed gradually so that the audience meets some student radicals and learns more about Ferdinand’s beleaguered wife Ivana, and Artemon, one of his ministers. Arran Beattie and Chris Best display a wonderful camaraderie as the two imprisoned actors and appear in other small roles as well.  These artists are immensely watchable and perform with confidence and palpable connection.  Poppy Mee is memorable both as the complex character of Artemon and as reluctant student Bec.  Mee dominates the stage with a beautifully modulated and richly toned voice alongside her convincingly commanding physical carriage, but accesses a more vulnerable persona as needed.

Ellen Graham is a powerful actor giving voice to the tormented Axelle, a student protesting the regime and whose uncle Karl has been ‘disappeared’.  Graham also supremely presents a different nature as one of the ‘faceless’ agents of the regime - a little reminiscent of Orwell’s thought police, or possibly Mr Smith from The Matrix.  Playing two disparate personas, Grace Boyle does tend to get rather shouty as Erasmus, the famed actor beloved by the regime.  Yes, Erasmus is a zealot and a declamatory jester type but there are other ways to convey this.  The shrill volume at times muddled the dialogue so that words and meaning were lost although the pronounced physicality was appropriate.  As Ivana, Boyle excelled, giving us a window into the vulnerability a dictator’s spouse might experience.

As General Ferdinand, Yoz Mensch made the madness work.  Their role could have been trite and irritating, but Mensch navigated the character’s largesse, feigned innocence and dark psychopathy with just the right balance.  They also managed the wordiness of the role with utter conviction and understanding.  Mensch also gave life to palace worker Uncle Karl in an astonishing wig and beard. This ensemble have done an immense amount of work to make this piece of theatre shine and it is beyond exciting to be present as new work is developed and presented.  I would enjoy seeing this production again toward the end of the run to see how the cast and the flow settles.  It is also wonderful to observe that the future of theatre is in talented, capable hands.