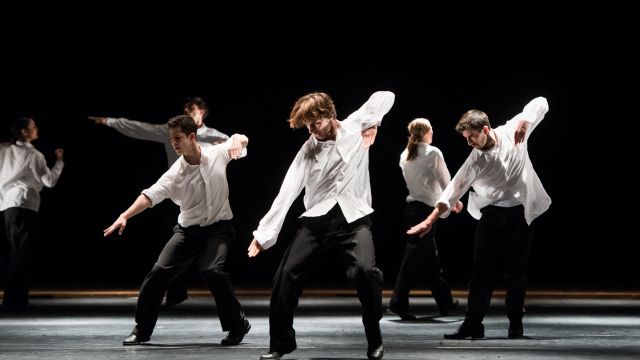 This event is such a fascinating union of classical music, dance and the art of choreography. We hear three different renditions of the same piece of music by Beethoven and watch three diverse works by female choreographers first programmed together by the Lyon Opera Ballet at the instigation of Artistic Director Yorgos Loukos in 2016.

Maguy Marin, Anne Teresa De Keersmaeker and Lucinda Childs are the creators, Childs’ work the only one commissioned whereas De Keersmaeker made her interpretation in 1992, and Marin hers in 2001.

The music is Beethoven’s Grosse Fuge, intended as the final movement of his Quartet No.13 in B-flat major, written in 1825 near the end of his life.  When audiences first encountered this piece, the reaction was not favourable and the composer was implored to remove it from the Quartet and publish it separately.  Stravinsky apparently said of this piece that “it will forever be contemporary” and it certainly has a jagged and monumental structure of complex contrapuntal form which is not easy to play for many musicians.

The first work is Lucinda Childs’ “Grande Fugue - Piece for Twelve Dancers”.  It begins with dancers walking into the space in silence, women in neutral grey figure-hugging unitards and men in tights and T-shirts, surrounded by the same neutral shades on floor and sides.

The relief from this austerity is an intricate ‘lacy’ patterned monotone projection at rear which changes shape and perspective for each section of the work.

I felt the male dancers performed well, the women in this piece, less so. 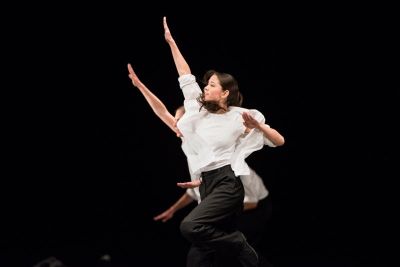 The choreography is closely aligned to the music with predictable balletic vocabulary, often realised in canon to mimic the score and underline the recapitulation of the fugal motifs.  There is a formality and sense of symmetry about the movement reminiscent of a grand ball setting.  It is complex, dispassionate and mathematical in design, yet the choreography uses simple steps and strong diagonal shapes all wedded to the composition of the music.

The version of Grosse Fuge chosen by Childs was quite heavy-handed, stark and uncompromising, played by the Lyon Opera Orchestra.

In contrast, for “Die Grosse Fuge - Piece for Eight Dancers” Belgian choreographer Anne Teresa De Keersmaeker has used a recording by the Debussy Quartet which is still forceful but more refined than the orchestral version.

De Keersmaeker’s choreography is worlds away from Childs’ formal composition.  This work is raw and fiercely spirited.  There are some unison and canon sections but the whole piece exudes chaotic vigour, the performers rarely stopping.

The music begins with the stage in total darkness until the dancers enter in dark suits and white shirts as the lights fade up on a black, pared back space.

The feature of this choreography is the intense ‘fall and recovery’ style that sees the dancers fall and throw themselves low or flat to the floor, then roll, twist and energetically rebound to the vertical, defying gravity.  It is thrilling, abstract dance with quirky, idiosyncratic gestural additions to the full body movement.  Even peppered with some slower sections, the chaos still deepens as the dancers remove their suit jackets and become progressively more dishevelled.  The dramatic ending sees the entire cast leap into the air as the lights snap to black.

The third work of the evening, “Grosse Fuge - Piece for Four Female Dancers” is from the creative mind of Maguy Marin.  This much lauded French choreographer said of Beethoven’s composition: “For me, it’s very desperate music, and also very dynamic and courageous.  It gives me something grave, something deep in sadness, but at the same time it’s always falling and coming back, falling and coming back. It’s always reviving, being brought again to life.” 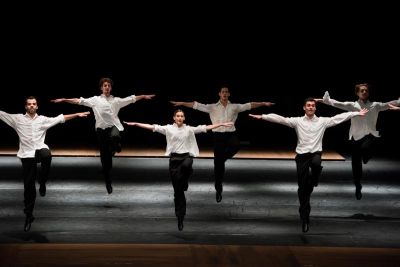 Her four dancers are clothed in red, similar but not identical to one another.  The movement here is still very physical and gutsy but conveys an emotional component, more so than the previous two works.

There are rarely any pointed toes or perfect extensions to be seen.  Rather there is an ‘anti-technique’ aesthetic that is deceptive because you must be in possession of astonishing technique and core stability to ‘appear’ to throw away the strict dance polish and bravura moves.

The four women seem to exist in a demented playground where Beethoven’s moods and rhythms dictate their movements and trajectories.  The occasional moments of unison are all the more vivid because of the general air of abandonment and the dancers also add percussive claps in certain sequences.

There is an essence of frustrated, burdened humanity in Marin’s “Grosse Fuge” and the ending is a polar opposite to De Keersmaeker’s triumphal leap that sees the four women sink to the ground, flat on their backs.

This was a wonderful addition to the Adelaide Festival in 2020, a fine opportunity to see the Lyon Opera Ballet in action.  They are famed for their dedication to commissioning new work and choosing not to re-visit the usual Classic or Romantic repertoire which is best left to much larger companies.