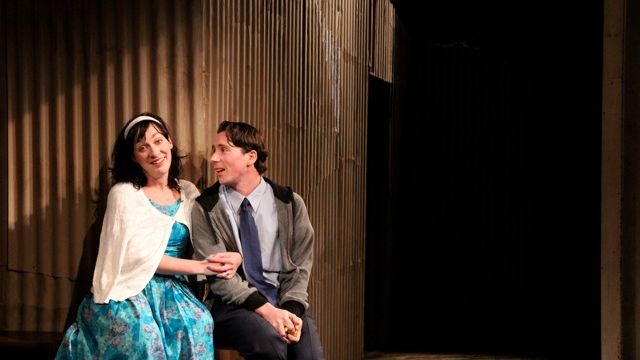 True Love Travels on a Gravel Road is a beautifully written play that cares deeply about the lives of each of its six characters as they stumble towards happiness. Written by Jane Miller, and clearly benefitting from careful script development (aided by an R E Ross Trust playwrights’ award in 2011), it impresses because its characters and their situations are so believable.

Quite often plays in Melbourne’s independent scene get produced without going through a rigorous process of re-writing and workshopping, or at least that’s how it looks. Some might say that’s a good thing, because it gives the scene an edge and allows for experimentation. But when the audience comes away thinking the play was written more for the playwright’s enjoyment than their own, that’s not good for anybody.

Happily, True Love comes to the cavernous 45 downstairs performance space as a fully realized, and very entertaining piece of theatre. Director Beng Oh says, in the program notes, that Miller’s every word “has been carefully chosen, tweaked and placed just so”, and you agree with him.

The story presents three couples – the dreamy Maggie (Emily Goddard) who is married but longs for a happier life with the sweetly deluded Jake (Glenn van Oosterom); office workers Sam (Chris Broadstock) and Angie (Marnie Gibson), whose courtship and marital problems are achingly real. Finally, there is the bogan gun-dealer Richard (David Kambouris) who starts to develop an appreciation for Maggie’s jaded mum Glenda (Elizabeth McColl) in an hilarious scene in which they are both tied to a chair by an electric power cord.

What brings all the characters together is Elvis, or more specifically his Memphis home, Graceland. Maggie’s mum Glenda is a fan of the King, but has given up on the life of glamour and excitement that he represented when she was a young woman. Her daughter Maggie, however, won’t let it go. By confiding to Jake that she wants to visit Graceland, she sets off a desperate struggle that will change everyone’s lives.

The connection between the characters comes quite late in the play, allowing us to get to know their individual stories and care about what happens to them. The story gets stronger as it goes along, as do the performances. McColl and Kambouris nearly steal the show as Glenda and Richard with their very funny ‘courtship’ scene when they are tied together on a chair. It stands as one of the funniest double-acts I’ve seen, anywhere. Gibson is particularly strong when confronted with her husband’s betrayal. Her pain and disappointment is palpable. Van Oosterom plays Jake as a naive suburban boy for most of the play but shows impressive range in the scenes where his character faces up to reality. Goddard is luminous as the pretty young Maggie, whose wide-eyed expression and optimism hide a growing maturity.

True Love director Beng Oh also deserves a lot of credit for his fine control of the play, great casting and awareness of just how much the audience needs to laugh, and to empathise.