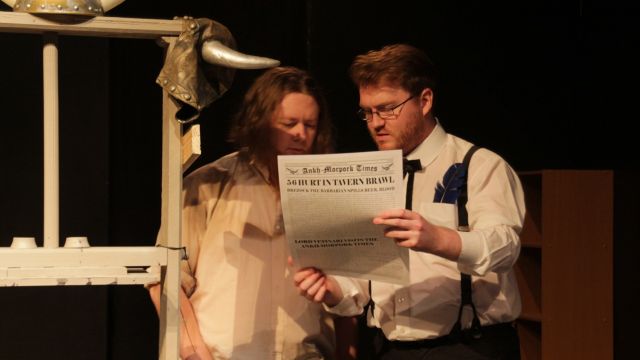 The Truth is the 25th novel in the Discworld series by esteemed English author Terry Pratchett, and adapted for the stage by Stephen Briggs. Director Pamela Munt has assembled a large cast to bring its absurd mix of characters to life in Unseen Theatre Company’s production.

William de Worde (Hugh O’Connor) is the town’s journalist. With the help of two dwarves (Leighton James and Alycia Rabig), a vampire (Danny Sag) and a fair maiden (Natalie Haigh) he produces the Ankh-Morpork Times. Whilst he is busy filling the pages with local disagreements and pictures of oddly shaped vegetables there is trouble brewing amongst the locals as a plot to overthrow the city’s ruler Lord Vetinari (Philip Lineton) is put in place.

Sag is amusing as the vampire hired to take photos for the paper; his work with flash is quite farcical. 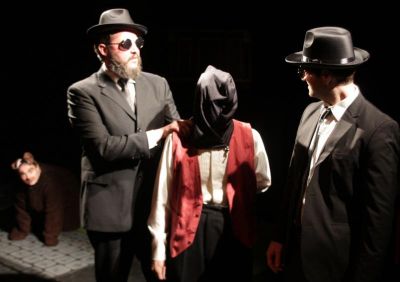 Nick Andrews and Paul Messenger play henchmen Mr Pin and Mr Tulip with hilarious results. Their oddball banter, complete with a speech impediment mixed in, equates to plenty of laughs throughout the play. Mr Slant (Pamela Munt), a zombie lawyer, is menacing as the criminal mastermind, but the misdeed is in danger of unravelling when the Lord’s dog Wuffles goes missing.

Aimee Ford is delightful as anonymous tipster Gaspode, the brains behind the mumbling beggar. The cast do an admirable job playing several roles throughout the play and each change in character is enhanced by well thought-out costumes. The multi-level set is practical and appealing, making use of established doors either side of the performing space.

Whether or not you are a fan of Pratchett’s work, you will be pleased with the results. An enthusiastic cast and competent technical crew make this an entertaining night at the theatre.