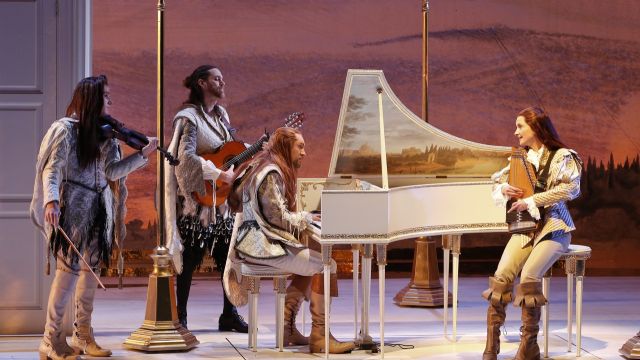 Twelfth Night is an excellent rich, complex and pleasingly staged end-of-year offering from Melbourne Theatre Company.  Boldly directed with vision and flair by Simon Philips, it would seem no expense has been spared to entertain, delight and amuse audiences with this fine production.

If you are looking for the perfect treat for the Festive Season don’t hesitate to buy tickets.

One of Shakespeare’s comedies, the themes are of love, most particularly romantic love, and mistaken identity.

The story opens just after a disastrous shipwreck where many lives seem to have been lost.  Viola (Esther Hannaford), a young noble woman, is swept onto the Illyrian shore.  She believes her twin brother Sebastian (Caleb Alloway) drowned.  She proceeds to make the best of a bad lot, in a strange land, by taking on the guise of a young man.  What is especially fascinating is the stretching and warping of expressions of gendered identity and sensual magnetism due to this disguise. On a lovely set by Gabriela Tylesova, the evening is linked together and buoyed along and with the most marvelous music by Kate Miller-Heidke and Keir Nuttall (“If music be the food of love, play on,” – to quote from the text).  It is grand listening to the most distinctive singing voice of icon Colin Hays, from ‘Men at Work’ fame.  He plays Feste - a fool - though perhaps wisest character in the play.

As all components of the work blend more smoothly together the music will no doubt further delight and help link the whole into a marvelous elevating romp.

Gabriela Tylesova’s costumes, inspired from the Elizabethan era, are of bold and handsome design. They are beautifully made and exhibit exquisite subtlety in their use of fabrics, leather and variations in colour.

The casting is exemplary though mixed. Tamsin Carroll cuts a fine Lady’s Maid Maria and her ‘partner in crime’ Sir Toby Belch is well fleshed out by Richard Piper.

Orsino (Lachlan Woods) is a beguiling dandy of a Duke.  He is surrounded with just the right element of foppery in his courtiers and musicians played by Caleb Alloway, Roderick Cairns, Anthony Harkin and Alec Steedman.

Particularly delightful in this production is the expression of the subtext of the physical connection between Orsino (Lachlan Woods) and Viola (Esther Hannaford).

As Viola, disguised as Cesario in masculine attire, Ms. Hannaford cuts a lovely solid energetic youth.  She plays this androgynous role with strength and charm.

Frank Woodley as Sir Andrew Aguecheek enthralls the audience.   With even the slightest expression of whimsy from this wacky character Woodley brings forth squeals of delighted laughter from an audience who truly love him.

Christie Whelan Browne cuts a very grand, marvelously expressive, perpetually bewildered Olivia.  Her characterization errs a little toward being over theatricalized but totally suits the part, and is massively entertaining.  She is a very ‘well oiled’ actor who sets an exceptionally ‘high bar’ for those she is working with.

The much-maligned Malvolio is played most skillfully by Russell Dykstra.  We watch the foolish Malvolio being manipulated, set-up, tricked and pilloried in a deeply humiliating way by a wickedly ruthless Maria and volatile Sir Toby Belch.  This aspect of the play seems to ‘come out of the blue.’

Although funny, it is also pretty brutal. It’s the type of funny you wish you didn’t find funny.  Dykstra plays the role with gullibility, pervading sincerity and dignity that makes Malvolio’s comeuppance particularly moving. On opening night it felt a little like a jig-saw-puzzle where the parts had not quite been snugly placed together.  However a full compliment of ingredients are there - with the exception of the added dash of a few more days of rehearsal.  Despite this - the whole audience stood for an ovation.