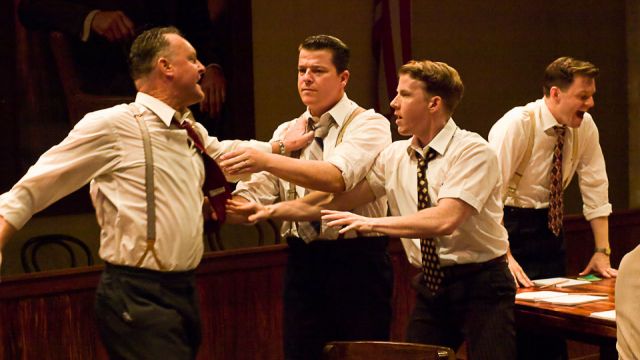 Some may question the validity of another revival of Rose’s classic 1950s play about prejudice and  persistence. Those people really need to see this production, and their question will be answered for all time.

Rose’s claustrophobic drama is set in a jury room, and the problem has largely been, for stage, that the audience is too removed to feel truly connected to what is happening. It’s one of the reasons why the film was more successful; it allowed us to get in close, to see the beads of sweat on a top lip – to see the doubt in a man’s eyes.

Baldock’s bold vision for this production takes the best of what film offers, and puts it on the stage – without the expensive use of cameras and screens. Instead, he puts the audience not only in the auditorium, but in gallery seating on three sides of the stage, and he uses the jury table – on a revolving stage – as a peripatetic set, constantly giving us another angle, another close-up. It’s so brilliantly thought out that one wonders how a director could “block” the revolve so that one juror has his back to us as he is abused, only to, within seconds, be facing us for his response. Of course it is only made possible because the concept and set design are also the work of the director. 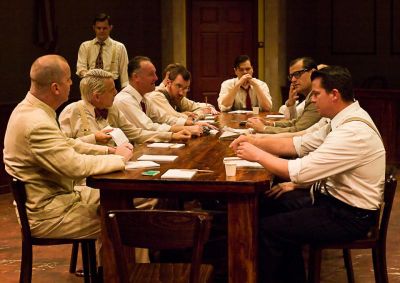 The actors do step off the revolve – each corner of the stage provides a part set, which is utilised brilliantly. A water cooler, the wash-basins for the toilets, a coat rack. At one stage (I was sitting on stage in one of the galleries) I could have reached out and touched two jurors, in a deep discussion no more than a metre from me. And though the dialogue was ‘sotto voce” and could only be heard by, at most, 2 of us, it was pertinent and relevant discussion and I truly felt part of it. And I could see the beads of sweat on Juror 10’s (Darren Gregor) top lip; see the doubt beginning to grow in the Foreman’s (Benjamin Watts) eyes. Every flicker, every nuance, every thought was intimated without being overplayed to an audience somewhere “out there” in the stalls. Stunning theatre.

The acting is superlative, even more so when one realises that, at best, many of these actors would be considered semi-professional. Most have day jobs and one can’t help but wonder how actors of this calibre can get it so right, when so many of our “name” professionals get it so wrong in Main stage productions.

In an ensemble piece like this, every juror has his “moment” and not all come through the longer speeches, or set pieces. All were brilliant, but I must mention first the honesty and intensity of Soren Jensen as Juror #8 – the role made famous by Henry Fonda. There’s a stillness at the central core of Jensen’s performance which makes Fonda look like he is over-acting. He is focussed, totally involved in the character, and the result is the honesty that every actor strives for. 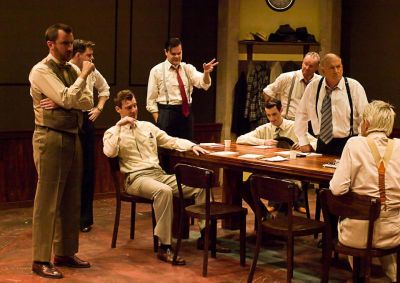 Robert Lloyd does superlative work as Juror #11 – whose European background gives him a different perspective. John Cheshire’s dapper elder statesman (Juror #9) is filled with the confusion of old age, but when he pounces it is with total conviction, and he is deliciously pleased with himself in his moment of glory.  Darren Gregor – as the hateful and full of hate Juror #10 – has so much tension and prejudice within him that it’s palpable and one can easily believe that it’s his vicious bile which is making him sick…powerful and pitiful at the same time. Trevor Hanna  (Juror #3) portrays perfectly the angry heartbreak of a man for whom this is all too personal. Jensen’s parting line to him was heart-wrenching in its simplicity. Chris Palframan (Juror #4) fits comfortably in the role of a stockbroker, a man whose class and intelligence set him apart. Dylan Cole (Juror #7) is dynamic, and uses the stage brilliantly, though he wouldn’t lose any of his strength if he reined the performance in just a fraction.  Benjamin Watts (Juror #1), Lee Cook (Juror #2) Thomas Caine (Juror #5), Xavier Ryan (Juror #6) and Jonathan Best (Juror #12) all give terrific performances and contribute to the authenticity and credibility of the piece.

As the Court Guard Joshua Fernandez (still doing year 12 in High School) is a little green, but will benefit greatly from being on stage with such a stellar cast.

Deryk Hartwick’s subtle and impressive lighting design complements the action brilliantly, as does Bruce Parr’s sound design, and kudos to the ladies who sourced the costumes.