Twenty Minutes with The Devil 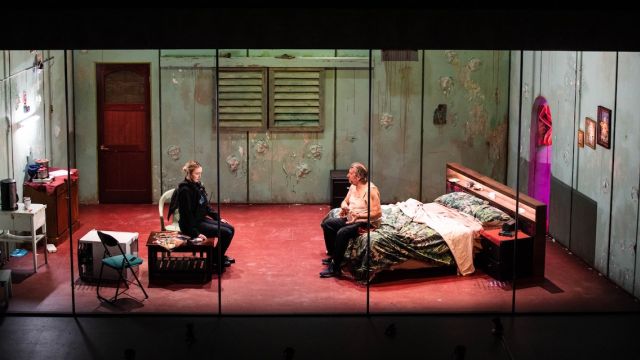 How is it possible to enforce the law in a land so corrupt that cartels and police work hand in hand? What if doing the right thing will likely get you killed, and probably won’t make any difference anyway?

Inspired by the capture of Mexican drug lord El Chapo, Twenty Minutes with the Devil is equal parts magic realism, morality tale and thriller. Two highway patrol police, Angela Bassols Guzmán (Joanna Richards) and Rómulo García Hernández (Raoul Craemer) pull over a car doing 130 kph in a 100 zone and discover a bootload of weapons and a filthy, smelly old man hiding under a rug on the back seat, dressed only in singlet and trousers. When they discover he is the hugely powerful drug baron El Ticho (PJ Williams), they are thrown into panic, realising they have twenty minutes before either his men, his rivals, or the army sent to arrest him will arrive, and they must make decide how to act. What is the right thing to do? Will that get them killed? In the lead role as El Ticho, PJ Williams is the calm in the eye of the storm. Relaxed and even avuncular towards the officers as they brandish guns at him, his genial manner belies his sheer ruthlessness. “Ticho” is a diminutive of his name Patricio, but it also sounds like the English word “teach”, and indeed he seems to be something of a teacher. Calm and pragmatic, playing on Angela’s and Rómulo’s emotional weaknesses, it’s hard to tell at any time who has the power in the room, superior officer Angela, crazy-brave Rómulo, or the old man in handcuffs who they are acutely aware has been responsible for countless deaths, actively through murder or passively through overdose. Raoul Craemer’s Rómulo treats policing as a job only; not hung up on rules, he just wants earn cash, maybe bully a few people and see his daughter occasionally. Craemer brings out Rómulo’s weaknesses, bravado and hypocrisy. If Rómulo’s motivations are largely id-driven, Angela has an overdeveloped superego. For complex reasons, she clings to rules, be they laws or from the Bible. For reasons I’m not entirely sure of, I found Joanna Richards a little less convincing if only because Williams’ and Craemer’s characters developed more rapport, but it’s a good performance, conveying complexities and hidden traumas, and the fast-paced banter between Angela an Rómulo is very funny. Writers Luis Gómez Romero and Desmond Manderson have crafted a story full of depth and symbolism, sketching out an ethical landscape which becomes increasingly murky. They flesh out characters with inner monologues which explain their back stories, hinting at their motivations and weaknesses. The characters slip into these explicatory sequences with dimmed warmer light, and then break back into reality with a sudden flash of harsh blue bright light which fades to normal room lights, in a way that is reminiscent of emerging from a cave and your eyes needing to adjust. Anthony Hately’s evocative lighting design adds to the increasing tension and works with Imogen Keen’s claustrophobic set to initially hide, then bring out symbolic features in the walls. These were an inspired, surreal illusion: at the beginning, these just look like the peeling paint of a particularly grotty hotel, but as the light direction shifted, screaming faces emerged.

This is a fast-paced, clever, funny and tense modern fable was given an ingenious interpretation by The Street. I hope we get to see it again.