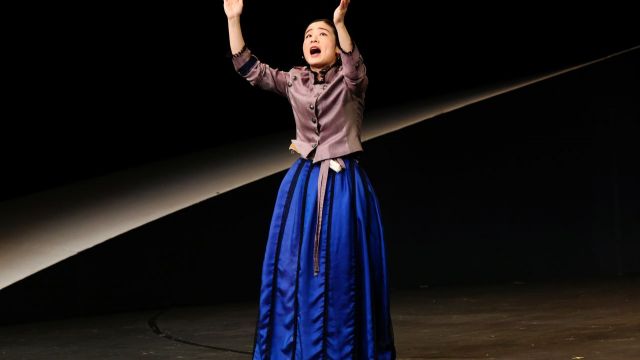 Writer, composer and singer Jaram Lee is an astonishing performer as she narrates the sorrowful tale of Anna, who falls foul of three husbands, struggles as a war merchant  and, after she loses all three of her children to war, in grief changes her name to Ukchuk. This is the wrenching tale of Brecht’s famous survivor, Mother Courage, a women lost in the disastrous Thirty Years War, forced by the world to abandon her humanity and all moral niceties.

Lee translates this horror perfectly to the seemingly endless conflict between North and South Korea.  What’s more, the 37-year-old Lee makes a proper Brechtian by continually breaking her narrative for sips of water, easy banter with the audience, musical interruptions and other quick mood changers.  These tricks of Alienation, as with the original, still never quite distract us from the powerful empathy Lee builds with us in her grief, poignancy and ironies.

Applauded in Korea for her revival of an originally 17th tradition of expressive singing and stylised speech, Lee throws her voice from deep tones to remarkable heights, sometimes quietly girlish, other times operatic to the back seats.  With the drummer, a couple of musicians deliver everything from percussive soundscape to Korean pop.

What starts personably as a modest show evolves into an impressively staged production rich in lighting and effect.  And through it, Lee moves exquisitely, shifting seamlessly between some 15 characters, driving this classic onwards with a compelling urgency which never stops growing and never lets go of us.