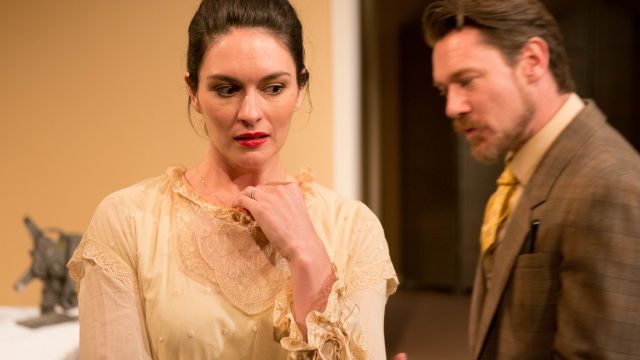 In many ways, one would expect Annie Baker to produce the perfect contemporary vision of Chekhov. Her much lauded play The Flick, so successfully directed by Tass a year or more ago, has the same sense of the humdrum, the ennui, of Chekhov. I am told that Baker’s script is hilarious on the page – and Chekhov always insisted he wrote comedies – but you wouldn’t know it from the Red Stitch production.

There are subtle differences between ponderous and languorous, between boredom and ennui, between giving up and giving in: in each case Director Tass chooses the former, and the result is a mere shadow of what Chekhov intended. It’s fine in theory to want to make the classics more contemporary, more relevant to a current audience, but when one dresses the production in late 19th century attire, one can’t then play low key; Chekhov is not Pinter – though one could argue there are similarities in their exploration of the banal, and their ability to find hilarity in the everyday. This production doesn’t honour either in its stodgy approach. There is simply too much time between lines, too much thought behind them (these characters are living in excess without thought), and I – like several others on opening night – was constantly leaning forward in my seat willing the actors to pick up the next cue. One can be drowning in ennui and depression, yet living frenetically on the surface. That’s what Chekhov does so brilliantly; that’s what this production lacks, and partially it’s because the characters have a self-awareness that is not a true part of those people in that time frame. They lack purpose, but they don’t angst about it.

There is good work from the cast, most notably from the Kaczmareks – who know their Chekhov inside out and were an integral part of Poland’s theatre scene for several decades. It might appear that they play too big – but, in truth, most of the cast play too small. 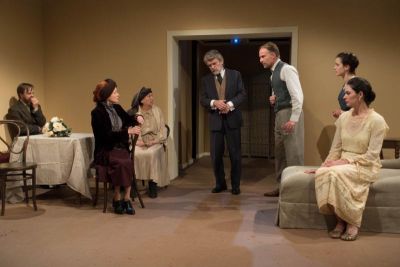 Marta Kaczmareck brings an earth mother, drowning in vaguery, to the role of  Marina and, seemingly without effort, manages to steal every scene she is in.  The Samovar is the centre of her universe, and she is quite marvellous. Justin Hosking is the perfect foil as Telegrin, a character who truly doesn’t understand what drives those around him, and his guitar playing is delightful. Olga Markeeva (Maria),  with barely a word to say, brings her charismatic presence and a true sense of ennui to a sea of understated boredom.

David Whiteley’s Vanya starts well, managing to bring gravitas to his own banality, but he soon sinks in the turgid quagmire that threatens to consume all. Whilst Chekhov wrote ensemble plays; the piece is called Uncle Vanya for a reason and if we the audience (let alone the other characters who are part of his life) don’t know what is going on inside, there isn’t much left to drive the play.

Ben Prendergast, always a delight to watch, gives veracity to Astrov – breaking out of his boredom to show flashes of the passion that might drive the life he is too fearful to live. Eva Seymour is a special treat as Sonya, finally delivering the quality performance we have expected from her year as graduate ensemble member. Rosie Lockhart looks truly beautiful as Yelena, yet never truly finds the woman behind the mask of languor. We can only wonder what, if anything, is her raison d’etre.

And finally, Kristof Kaczmarek commandeers the stage in his moments as Serebryakov, a man blissfully unaware that the days of his importance as a lover, a justice, a figure of importance, are all behind him, and all that’s left is larger than life Absurdity. He understands his Chekhov and is genuinely funny, but also tragic, in his pomposity.

Sophie Woodward has once again miraculously transformed the tiny space that is Red Stitch with her design. She has the ability to use the depth available to suggest a large manor with countless rooms out of sight. She uses a warm colour throughout the entire theatre to give the impression that we are all part of a vast drawing room. Her costumes are equally as good. She is one of the finest assets of this production. It’s not the best way for Red Stitch to end an uneven season, but there is still a sense of anticipation for 2017.