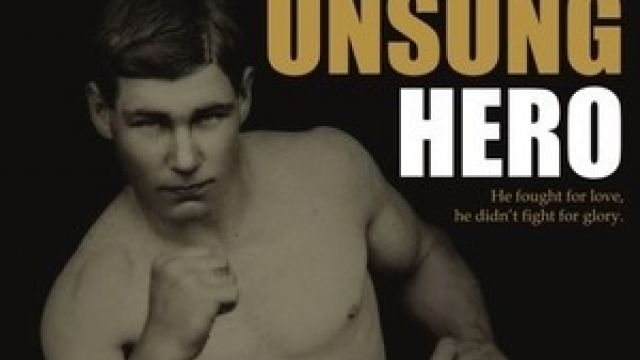 Les Darcy (1895-1917) was once upon a time a revered Australian icon; now, sadly, he is largely forgotten, hence the title of Unsung Hero for this truly delightful musical version of the life of Les Darcy. On a bare stage in the small Pocket tent, three performers – Chris John, Jim Paterson, and a wonderful female singer known simply as Alex, narrate the story of Les Darcy’s brief and tragic life interspersed with new original songs and music with a distinctive Irish flair.

As is narrated, Les Darcy was born in Maitland, NSW, in 1895, into a poor Irish-Catholic immigrant family. Throughout his entire life Les Darcy was motivated by the desire and need to lift his family out of abject poverty. He left school at the age of 12, and relatively quickly his talent and skill as a boxer was noticed and encouraged. He rose to great acclaim, success and glory, being hailed as the ‘Maitland Wonder’. He met a young girl called Winnie, whose father ran the Lord Dudley Hotel in Paddington, Sydney. They wanted to marry, but parents stopped them, thinking they were too young. Winnie, however, was to remain the love of Les Darcy’s life. When WW1 broke out, Les Darcy wanted to enlist, but was too young. His mother, being a strong and formidable Irish-Catholic was furious; bitterly opposed, like most Irish-Catholics to the essentially British Empire war, seeing Britain as using young Australian men as ‘canon fodder’. Les, however, still wanted to serve. He resolved to go to the USA to box and raise money to set up his family before he went to war. He had to stow away on a ship to the USA as the then Australian government had confiscated his passport. Once in the USA things got considerably worse. In the Australian and US press he was attacked and vilified, labelled a ‘traitor’ and a ‘coward’ for not enlisting and fleeing to the USA. Suddenly all the fights he had scheduled were cancelled. He was isolated, ostracised, and alone. Meanwhile in Australia, his family and friends received ‘white feathers’ (a symbol of cowardice) and were also ostracised by the vocal and aggressive moral majority of the time. Les Darcy did manage to secure one fight in the US – in Memphis, Tennessee. The condition was for him to first enlist in the US army, which he did. He arrived in Memphis but suddenly collapsed. Due to infected teeth he had contracted septicaemia. Winnie, who was in the USA, rushed to his side. He died in her arms, his final words were an appeal, ‘Take me home, Winnie’. He was only 21 years old. When his body returned to Sydney there was a massive funeral with over 200,000 mourners – the largest funeral attendance for a private citizen that had ever been in Australia.

Yes – it is quite a story, a magnificent Australian romantic tragedy that should be better known today. Chris John, Jim Paterson, and Alex, perform this original musical version of the life of Les Darcy with great zeal and passion, as well as humour and poignancy. I saw this performance with a sizeable group of ‘senior’ Australians of which I was probably the youngest (at 62 years old).

Encouraged by these engaging performers we all sang along, laughed and applauded, as well a dropped a few tears towards the end as the tragedy unfolded. In a world that is too often obsessed with  ‘youth driven’ theatre to the negation of others this was a truly wonderful and relatively different and enchanting experience.

This is not the first musical version of the life of Les Darcy; there is also Jack Hibberd’s The Les Darcy Show, as well as one by Terrence Clarke and Nick Enright (another Maitland boy). This new musical is a much welcome addition to this canon of work about Les Darcy. Hopefully, as is desired by the creators of this work, as it was with others, he will no longer be an Unsung Hero.