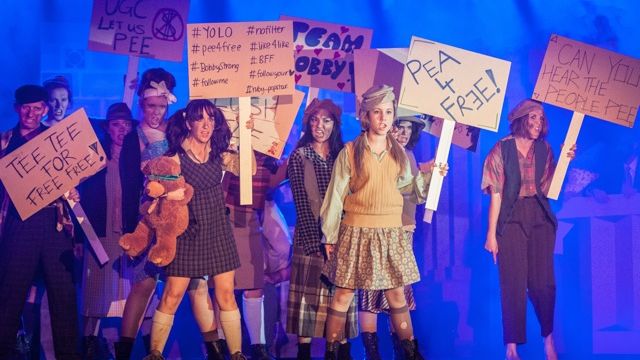 George S. Kaufman is famously quoted as saying "Satire is what closes on Saturday night," after Strike Up the Band, his satirical 1927 collaboration with the Gershwins flopped out of town.

Well things have certainly changed since that gloomy one-liner.

How do you describe the genre? Self-deprecating Brechtian musical comedy pantomime inversion, perhaps, with a bit of Greek and who-knows-what-else thrown in.

Private toilets have been outlawed during a 20-year drought to preserve water, and pay-to-pee amenities are a monopoly owned and operated by the corrupt, opportunistic Urine Good Company. The Regals, one of the companies in Sydney’s south forced to find temporary homes after the closure of Rockdale Town Hall, have made easily the best use of this suburban RSL auditorium I’ve seen, adding a full extension stage and arranging the seating theatre style. Yes, it finally felt like a theatre.

This rates comment before any other praise of the production; thorough conceptualization in adapting the venue was key to this musical production’s success.

Finally choreography has placed its stamp on a production at Bexley RSL, and choreographer Tracey Rasmussen did this in trumps, with work full of wit, pastiche, style and individuality, punched out with enthusiasm and energy by a vibrant, well-drilled ensemble. The space was still tight, but Rasmussen’s choreography was well tailored to the constraints. Ensemble acting and singing were also excellent, while featured cameo ensemble roles were generally nailed impressively and engagingly. The ensemble is at once Greek chorus and musical ensemble, and very effective as both.

Everyman hero Bobby Strong has been named among the 100 best roles in music theatre (there’s lofty company). Andrew Fabris imbues the ardent young pee-or-free revolutionary (and lover) with youthful passion, and sings the role impressively. The show features a delightful Les Mis rip-off ensemble, and Fabris’s rebellious Bobby rolls the best bits of Marius, Enjolras and Gavroche into one as Bobby. As heroine and daughter of the evil capitalist, Jameison Raabe’s Hope nails and sends up every wide-eyed, feisty, optimistic innocent musical comedy ingénue rolled into one, and looks the part to perfection. It’s a gorgeous performance.

There’s more than a touch of Groucho Marx to James Jonathan’s capitalist baddy Caldwell B. Cladwell in an assured, amusing performance.

Officer Lockstock is both narrator and a character, but James Swain rushed some of that narrative on opening night. Unfortunately much of this is also underscored, and I fear some of his best humour is lost of newcomers to the show. When he takes his time, there’s a quiet malevolence to Swain’s policeman, nicely contrasted with Peter Sharratt’s Officer Barreli.

When adults play kids as joyfully as Keely Soulsby as Little Sally, a character who owes much to Annie and every other sassy, precocious child who has ever strutted a musical theatre stage, it’s so engaging, and Keely her times her gags and breaking of the fourth wall impeccably.

Pennelope Pennywise, custodian of the convenience, is authoritarian and less comically rewarding than other roles, but Charisse Graber makes her convincing. And in a piece where there’s so many nods to theatre convention (am I reading in too much) towards the end she gets a deus ex machina (god on a crane) moment (I’ll avoid a spoiler here), providing her with a fun, though contrived, late-show reversal and some terrific moments. The muiti-hinged unit at the heart of Paul Riley’s set was a great idea, and showed its full potential on the occasions when the changes were actually made in clear view as the play continued, a convention worth pursuing further, rather than resorting to blackouts and scene change music at other times, in the interest of marginally more pace and fluidity in transitions.

Music, under the direction of Peter Sampson, was generally excellent, though sometimes better diction and projection were needed, as some underscored dialogue is lost, and occasionally less powerful singing voices were a out of balance with the band. It’s probably one issue you’ll never completely solve in a makeshift venue when the MD can’t be out front and centre modulating all the elements with a baton in the old style.

In a venue where theatrical lighting is a challenge, Rod Bertram of Rodney’s Sound & Lighting has improvised very effectively.

The satire turns, and there’s a delicious final twist, but again I’ll avoid being a spoiler for first time audiences.

This quirky little musical with a message, affectionately skewering theatrical and music theatre elements and we all know and love, is a personal favourite, well-served by The Regals’ production.