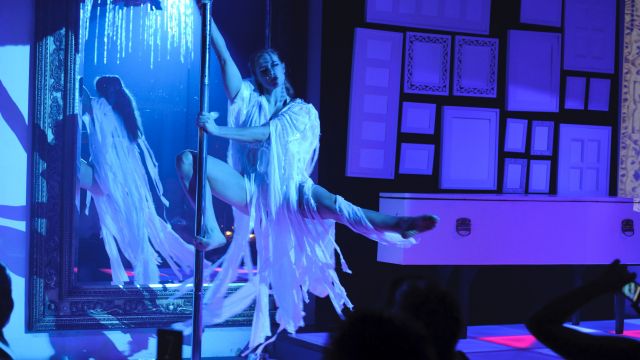 Nosferatu meets cabaret meets Oxford Street drag show, in a deliciousy integrated night of dinner theatre.
Screams of shock and squeals of laughter begin in the vestibule. But I won't spoil that!
The ghoulish glam of the hostess and Rocky Horror reminiscent waiting staff establish the mood from the outset.
Performers double as waiters and bar staff, or do I mean the reverse. Not an unusual occupational doubling, you may say, but terrifically integrated and atmospherically effective.
A loose plot premise is based around the 400-year life of the Black Widow, aka drag chanteuse Clare de Lune, the evening’s mc. The evening is broken into five pacy, bite-sized pieces, separated by themed degustation courses.
Pole dancing runs through the early scenes, by turns homo-erotic and hetero-erotic (Australian pole dancing champions Suzie Q & Stephen A Watson), giving way to a sizzling close quarters trapeze interpretation of dark seduction (Suzie Q and Toby Monson).
There is head turning exorcism, Clare de Lune revolving in humorous, campy quasi-puppetry, combining with erotic sacrilege, as the exorcising priests strip to their briefs.
A wide range of skills feature, some more tightly integrated into the narrative thread than others.
Magic from the talented Adam Mada, table-to-table close quarter magic, then razor blade swallowing and levitation from the stage, tangential entertainment justified for the black widow’s pleasure, still proves an audience pleaser.
Waitress-turned-songstress Ruth Schaumann sets the mood early with an evocative Ave Maria. Andreas Rhonner and Brendan Irving complete the talented team of actual singing waiters.
Atmospheric soundscape and multi-media add effectively to the mix.
The kitchen is another class act. The deliciously themed five course degustation meal, is appropriately matched to the playlettes, with glimpses of dark wit which I won’t spoil.
The Thriller finale featured everyone, even, fittingly, the kitchen staff.
Slide is a stylish adaptation of a classic former banking chamber, now making far happier use of its wonderful architecture.
If the Thursday night queue seems to be forming a little early outside one Oxford Street nightspot, you’ll know why.
Neil Litchfield