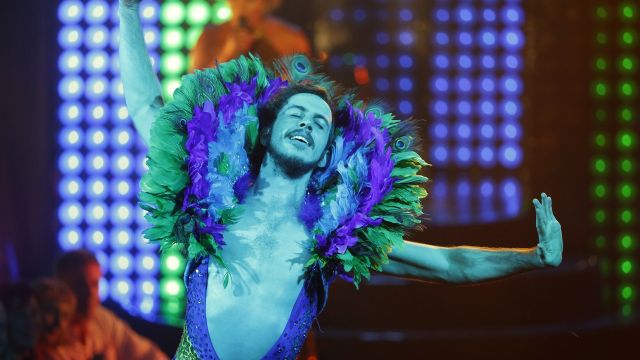 Velvet is gobsmackingly good! A fusion of cirque du Soleil, blistering vocals, and wall-to-wall disco dance beats, it had your adrenaline running from the moment you stepped into the theatre.

With the Cremorne set-up in cabaret mode, seven gigantic mirror balls, mirror columns, and a lighting plot no disco could ever afford, this show was 80-minutes of (disco) heaven.

Inspired by Andy Warhol’s infamous New York haunt Studio 54, a cast headed by pop-diva Marcia Hines brought the soundtrack of the times gloriously to life and reminded us what a great era it was.

It was terrific to welcome Hines back to the stage. Looking a million dollars and singing as well as she ever did, to say she was the glue that held it all together was an understatement. “Never Knew Love like This Before” sizzled, but it was “Last Dance” that had soul. To paraphrase the old colloquialism “It ain’t over till the fat lady sings,’ this show didn’t start until the fat-boy did his act. Hoola-hoop boy Craig Reid has to be one of the most original and incredible variety acts I have ever seen. A cheeky roly-poly guy with charisma his dexterity with multiple hula-hoops, which lit up like a Christmas tree, had to be seen to be believed and gave the show one massive energy lift.

Rechelle Mansour and Chaska Halliday added female eye-candy and were powerful back-up singers, whilst Stephen Williams and Mirko Kockenberger provided plenty of the male-macho equivalent and were skilled aerialists. They frequently doubled with Emma Goh who was no slouch when it came to swinging in the air.

The wisp of a plot had Brendan Maclean as an everyman being seduced by the hedonism of the club scene eventually becoming a dancing queen. An audience favourite, his quiet acoustic version of the Bee Gees’ “Stayin’ Alive” was a winner. The music charts were in good hands with Joe Accaria, who hovered over it all like a demented DJ and also showed he was no mean drummer when it came to playing the skins.

Back in the day the owners of Studio 54 famously dumped a four-inch layer of glitter on the floor for a New Year’s Eve party. The Cremorne didn’t have that much, but Matthew Marshall’s lighting design made sure every piece of glitz sparkled like a beacon. His work was undoubtedly the star of the show. Andy Warhol would have loved it.