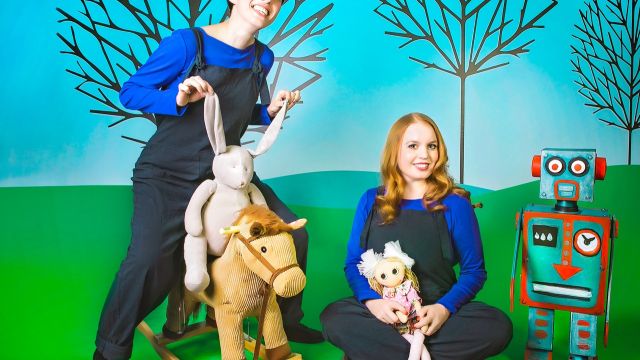 We can all recall that one special toy which, even in adulthood, puts a smile on our face when we think of it, and The Velveteen Rabbit Musical Show is about such a toy. Based on the children’s story The Velvet Rabbit by Margery Williams, this is a musical show that tells the story of a velveteen rabbit that becomes ‘real’ through the love of a little boy.

The show is written for 4-10 year olds, but the adults who were taken on the outing clearly enjoyed the show as well.

In Williams’ story, the velveteen rabbit wants to know what it takes to become ‘real’. His friend, the Skin Horse tells him, "Real isn't how you are made. It's a thing that happens to you. When a child loves you for a long, long time, not just to play with, but REALLY loves you, then you become Real.”

The message of this 45-minute show is very appropriate for the company presenting this show.  The Tilkin-Dilkin Studio is a not-for-profit association and a registered charity, providing opportunities to children for creative and educational development.

The two storytellers, Amy Fisher and Darina Vassiliev, take the audience along on a toy's journey of learning about friendship, loss and love. Each becomes one of a range of toys, with Vassiliev’s robot toy very convincing. Both actors shift seamlessly between narrating and becoming yet another character, aided by simple, well placed props that do not interrupt the storytelling.

The toys in the story ‘live’ through the actors, their props and differing voices that are used to create different toy characters. The vain, opera singing doll was popular and gave the actors a chance to showcase one of the original pieces of music. 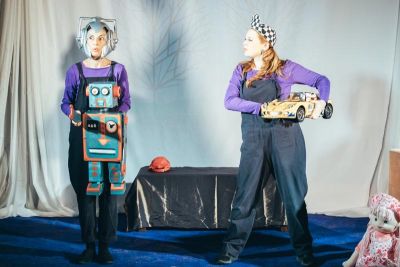 Fisher is a standout. She is lively, animated, warm, and has an expressive face that she uses effectively to engage her audience. Her portrayal of wise, old Skin Horse is well paced and evokes the confidence in his message that is born of years of being a much loved child’s toy.
A mixture of projection of images, animation and projected drawn sketches provides variety for the audience and is important in linking the story. At the show I attended the pace was patchy at times and a little disjointed, resulting in wriggling children who had momentarily lost the train of the story.

As with all well constructed children’s shows, there is a moment where the audience is invited to be involved. The performers are careful and ensure that all of the children in the audience can participate. This somewhat disrupts the story, but gives valuable moving and wriggling time for the children.

It is important not to give away the ending. Suffice to say, it has a happy ending, as all good children’s tales should, and the final visuals leave the audience knowing that the velveteen rabbit does indeed know what it is to be ‘real’.

This is a complex story that is simply told; the very real story about children growing up and of those who love them coming to grips with this.

Taking the example from The Velveteen Rabbit: being real sometimes hurts. The alternative to being real, however, is unimaginable.