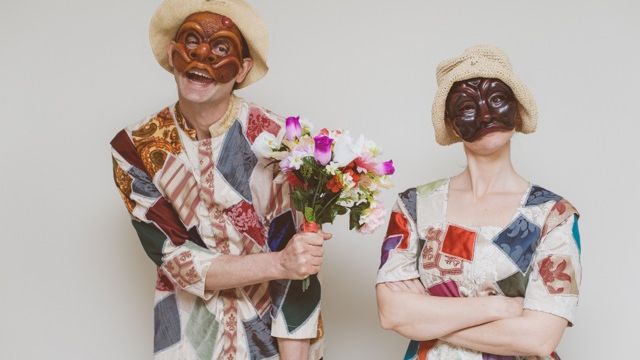 Venice in Love is an exciting and frequently very funny performance piece in the tradition of Italian commedia dell’arte, created and performed by Rosa Campagnaro and Christian Bagin from the ‘Make a Scene’ theatre company. Ms Campagnaro, who has undertaken specialised training in commedia dell’arte at Accademia Teatrale in Venice, is a polished and engaging performer and created a particularly memorable character in her portrayal of Pantalona, a selfish old woman whose eyecatching costume evoked an old buzzard. She also played the childlike and cheery Arlecchina, a complete contrast, who becomes involved in a convoluted plot concerning a love potion procured by Il Capitano, who wants to marry Pantalona’s daughter Isabella. The latter is a muppet-like creation also performed by the versatile Mr Bagin, who has a third role as Pantalona’s servant Arlecchino. All this is confusing enough to give rise to many farcical moments and frequently sidesplitting humour. Ms Campagnaro and Mr Bagin both displayed great comic timing and milked the maximum laughs from the script - Isabella’s wailing about her situation was hilarious, as was an extended scene in which a doctor, also played by Bagin, attempts to operate on Pantalona.

The humour, the colorful costumes and the outrageous moments were sure to appeal to kids, and at this performance there were plenty of them, including a group booking from a local school (Make A Scene provide drama workshops for primary and secondary school students and were running one after the show). But the many adults also in attendance found plenty to enjoy, despite the fact that the comedy was refreshingly clean and free of the multi-level humour (ie ‘adult’ content which supposedly goes over childrens’ heads) that so many assume is a must-have these days.

Venice in Love seemed like an authentic comedia dell’arte piece, in which everyone can laugh at the same points, for the same reasons, and get the same amount of enjoyment - an hour or so in which kids can be kids, and adults can be childlike again.