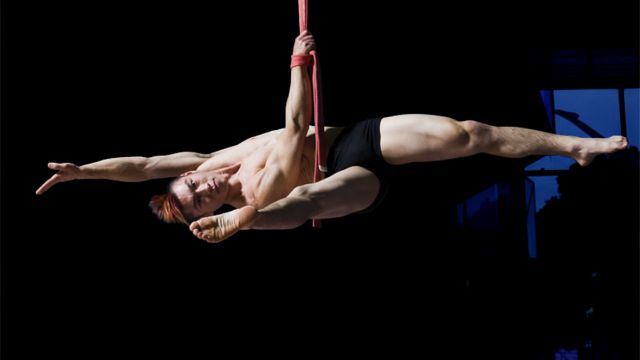 Veritas combines high-energy circus with video projection to “portray the interior landscape of archetypal characters each seeking the truth. Their bodies are suspended, falling fearlessly, risking all.”
This isn’t my first NICA show and it definitely won’t be my last. Melburnians are extremely lucky – and should be very proud – to have the National Institute of Circus Arts (the only institution of its kind in Australia) quietly camouflaged behind Chapel St’s coffee-culture.
Veritas was devised and directed by Holly Rollins, a former Cirque du Soleil aerialist, and choreographed by Meredith Kitchen. The soundtrack and its effects were a powerful compliment to the performances and the performers worked seamlessly to integrate with tricky timings. I found the mountain and tunnel images especially provoking.
Although the performers were searching for truth in the media, religion, love, I was captivated by a truth closer to home – the truth in their own abilities and those of their fellow performers. It’s not self-centred; these students risk everything and if they’ve learnt nothing else in their years at NICA they've learnt one skill that will see them well through life – self-confidence. But more importantly, they’ve learnt to trust and believe in their colleagues. You couldn’t let yourself be launched metres into the air without believing, unwaveringly, that your friends were waiting for you, arms outstretched.
If you’ve never been to a NICA show, you’re seriously missing out. There’s no better way to reassess yourself and remember that you really can do anything you put your mind to.