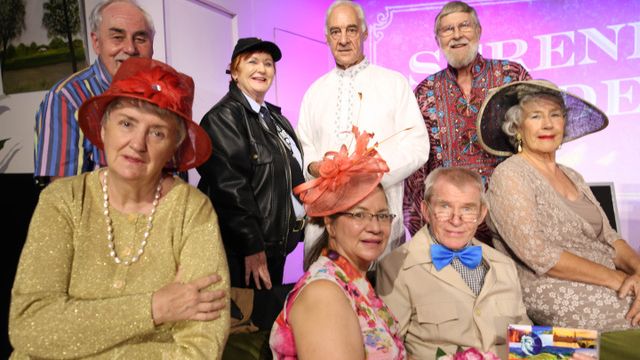 It was a jam-packed and enthusiastic crowd that attended the world premiere of Viagara Falls - Sweeten Up. There were plenty of laugh-out-loud moments in this bawdy, yet safe-for-nan farce. A few of the jokes in the locally-written script were definitely more relatable for Ipswich locals than out-of-towners. The narrative had recognisable and relatable characters. It was well-paced, with never a dull moment.

The story was set in ‘Serenity Gardens’ retirement village a week out from the wedding of two of the residents. Eric - the groom to be, played beautifully by Laurie Webb - having never married or been with a woman before, obtains some unisex Viagra from his doctor for the ‘big night’. All hell breaks loose when the residents mistake the tablets for artificial sweeteners and Eric tries and fails to get his Viagra back. Before you know it, one of the residents has mistaken the mayhem for a terrorist plot and the celebrant has unwittingly had too much Viagra. The bride and groom are worried their ceremony won’t be able to go ahead as planned.

The cast worked well together, which is even more impressive since they’d had two last-minute replacements step in. Any hesitations were quickly improvised around, with everyone working to keep the story on track. All actors were committed to the farcical style the script demanded. Most intoxicating was the palpable sense of how much fun this cast were having on stage. It’s always a great pleasure to see actors who are really enjoying the work.

The set design by David Finn was effective and the direction from Alan Youngson made great use of the set and the Studio 188 space. Noel Payne’s lighting design kept everyone focussed on the action and only really fell down when one of the actors who had clearly been brought in at the last minute had to pop in and out of the light to refer to her script.

Janet Findlay as Kitty delivered the most impressive acting of the evening. She had great charisma and comic timing. Richard Edwards as Dr. Sadhu delivered the most realistic performance, which was a nice counterpoint to the rest of the cast’s farcical style.

This play is fun for anyone aged 15 or over, but it especially appeals to a 50+ age-group. While the younger members of the audience were enjoying the show, it was the seniors who loved it best. They were laughing their heads off from the pre-show announcement all the way through to the curtain call.