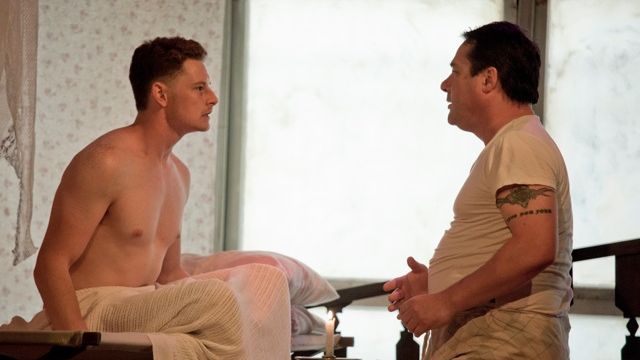 They say the best thing a director can do for her actors is create the appropriate atmosphere for a play’s characters to come to life in.  For invoking a magic little part of New Orleans in the 1930’s, at 45 Downstairs, full marks must go to Alice Bishop, as director of this rich and satisfying production of Vieux Carré by Tennessee Williams.

As a fascinating piece of theatre history, it is a two-act play of the type fast becoming ‘museum pieces’.  Themes are dramatic and almost melodramatic but nevertheless universal.  On a life-like stage we are treated to the kind of poetic naturalism that had its heyday in the 1950s and 60s.  For decades this type of staging was the conservative norm that the reactionary Avant-garde theatre of the 70’s and 80’s pitted itself against (It is the style of production still manifest in many amateur theatres).  As accessible theatre/storytelling this genre of play and production makes easy and comfortable sense to a ‘lay audience’, particularly as stories generally flow sequentially. That said - to set the scene and enhance atmosphere in this particular production, fabulous blues guitar is beautifully rendered by Bob McGowan and cleverly and crisply piped into the auditorium. Impressive sound design throughout is by Nat Grant.

As the evening progresses, on an evocative set of a shabby rooming house in the old French Quarter of New Orleans by Alexandra Hiller, we gradually become privy to aspects of the lives of controlling landlady Mrs. Wire (Kelly Nash), maid Nursie (Francesca Waters) and a number of disparate tenants and visitors.  All this is seen through the eyes of a young poet/writer - denoting the emerging voice of poet/playwright Tennessee Williams (Thomas Blackburne).

Blackburne delivers a neutral, seemingly un-shock-able narrator, a young man of an empathetic condition, around whom people unashamedly and expressively expose their needy and volatile lives.

All actors portray their complex, all too human, characters with skill and clarity.  Stephen Whittaker works with the significant challenge of the character Nightingale, an aging gay man suffering TB, walking the fine line of conveying predator and victim.  Maureen Hartley and Brenda Palmer as Miss Maude and Miss Carrie bring light-relief with their delightful and charming, kooky but compromised, spinsters.

In this type of classic work Act I is the exposition and Act II furthers the story and offers a sense of resolve. The first half is palpably about loneliness highlighted by a poignant monologue, rendered skillfully by Nash as Mrs. Wire.  Act II, amongst other themes explores aspects of dying, acceptance and finally escape.

The second half dwells on the youngish, erstwhile fashion designer Jane Sparks (Samantha Murray) ‘fallen on hard times’ and confronting her worst fears, and ousting her seedy lover Tye McCool, whom she seems to have ‘fallen in with’ accidentally like a martyr.  Murray shines as Sparks and Fleming’s McCool is a strong consistent, convincing presence throughout the whole.  This half flows more evenly than the first, and has accumulated power to move the audience, from the understandings gleaned in the first half.

This is a play and production that many will thoroughly enjoy.