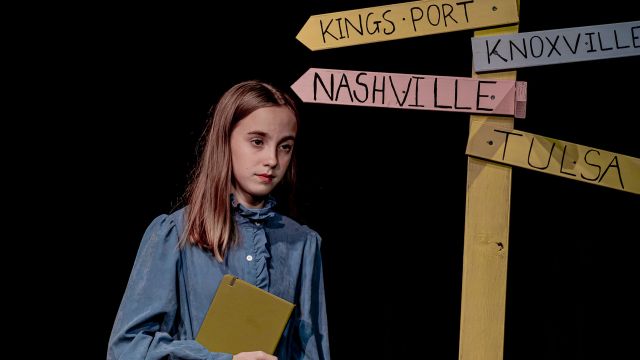 Lane Cove Theatre Company’s production of Violet is a musical not to be missed. It is complicated, sweet and topical all at once.

The central piece of scenery is a bus, the altar of the televangist program, the foyer of a hotel and the cover of the only cast entrance.  As such, it is simple but surprisingly effective.  There is a signpost down stage left which references all of the destinations mentioned by the bus drivers and passengers.  A candy bar down stage right completes the scenery.  With the exception of a few lightning fast changes, the costumes are uncomplicated and pair beautifully with the modest scenery. The benefit of the unimposing setting is that the audience is not distracted by glitz and glamour. This is performance in the traditional sense that relies on the talents and charisma of the actors. The nine people in the space are charged with the responsibility of sucking us in and holding our focus and they achieved this in spades.

Chelsea Taylor shines in the title role.  She hardly ever leaves the performance space and her innocence and faith in her quest are highly believable.  The audience is almost immediately on her side. Lindford Gilmour (Flick) is suitably gentle and chivalrous as one of Violet's suitors. He also provides a steady counterpoint for the firecracker of unbridled energy which is Tommy Green (Monty). Green is everything you expect in a young, cocky corporal. Trent Gardiner, a stalwart of Lane Cove Theatre Company, is endearing and genuine as Violet's father. His interactions with both adult Violet (Taylor) and younger Violet (Taylor Swan) are heartfelt and powerful. Gardiner also has a few fun cameos to look out for. Swan, as the younger Violet, is a twelve year old with a bright future.  She handles the serious nature of this material with a poise and maturity beyond her years.  Keep an eye out for her in the future.

Rounding out the cast are Miriam Rihani, Sam Howes, Isaac Downey and Lucy Koschel who all play at least three different characters. Rihani and Downey in particular have some very quick transitions but they both jump between characters with ease. Howes is suitably dubious as the televangelist, Downey brings some humour to ease the tension and Koschel brings some soul to more than one musical number. The band was small but effective under the leadership of Stephen Dula. In fact there were a few instances where the four musicians slightly overpowered the vocalists but this did not deter from the audience's enjoyment of the production. Kathryn Thomas (Director/Lighting Design/Set Design and Costume Design) should be congratulated for her pared back approach and sensitive handling of this tricky subject matter.  This show is a refreshing change from the growing culture in community theatre to focus on production values at the expense of the story and/or to compensate for weak cast members.

Bravo to all involved.