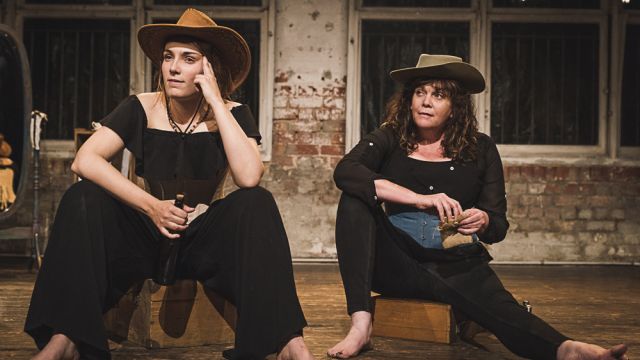 This is a story squarely focused on the experience of immigrant women from Britain during the colonial era. Ordinary but somewhat desperate women were enticed to Australia with the promise of a better life only to find an environment characterised by cruelty and hardship upon their arrival.

Unlike the convict experience, these women chose this destiny and Begley exposes how women’s vulnerability was exploited for the purpose of the advancement of a so called civil British imperial society. The story has been devised on the basis of historical research and actual events. Despite the somewhat sombre tone of the narrative, this show manages to tell some difficult truths in an upbeat and jovial manner. Begley’s talent as a musician and composer is evident from the outset; each tune has a beautiful melody and depth of emotion that makes the music lively and captivating. This small-scale and intimate production features three musicians: Helen Begley (guitarist), Kylie Morrigan (fiddle player), and Penelope Swales (whistle player). They provide a delicate musical accompaniment to the two actors who take on a variety of roles, but primarily carry forward the story of two main characters: The Good Girl (Carly Ellis) and Elizabeth Wade (Penny Larkins).

Both Larkins and Ellis have a commanding stage presence and are able to convey the different characters with wit and style. Ellis’s angelic voice is particularly suited to Begley’s sweet and emotional melodies while Larkins uses the power of her vocals to highlight the drama of the piece. Both performers effectively transport the audience to the era with the wide range of sentiments and characters they are able to embody. This story is not without its controversial elements. While it is an interesting aspect of Australia’s colonial history, it is also an overt reminder of the blatant racism and sexism of British culture at the time. It would be hard to imagine depicting this era from the perspective of Indigenous Australians, especially Indigenous women, with the same light-hearted approach. However, the show does not shy away from this difficult past and points out that the depictions deliberately capture the horrendous attitudes which have resulted in continued dispossession and discrimination against Aboriginal people.

This is a performance which is raw in its delivery and its content, but the production is a finely tuned and beautifully executed piece of theatre.