Voyage to the Moon 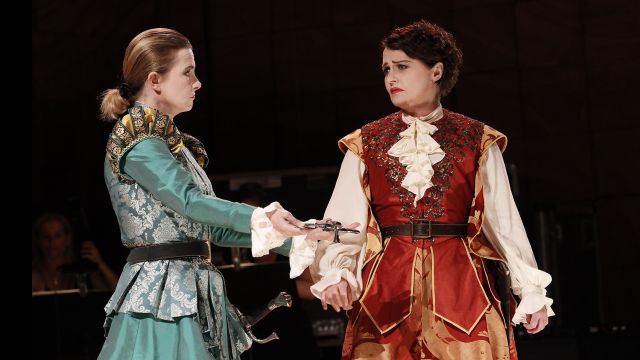 In the Baroque era copyright was unheard of, and it was common for composers to recycle arias from one opera to another, or borrow one from another composer if they ran out of time. So it was Victorian Opera and Musica Viva came together to create a new Baroque opera, based on an epic poem of the time, and using music borrowed from the same period.

The three male roles were taken by a soprano, mezzo and bass-baritone, with the soprano also becoming the Guardian of the Moon, a female character similar to the Queen of the Night.

Emma Matthews. Sally-Anne Russell and Jeremy Kleeman were a well balanced trio and the singing was beautiful. Emma Matthews had some furious coloratura to negotiate, which thrilled the audience. The others also handled their coloratura with aplomb, but had more lyrical passages to allow us to appreciate the beauty of their voices. As it was a concert performance the staging was a little static. It was innovative to use a couple of music stands as rocket ships to propel the singers to the Moon. Subtle lighting changes enhanced the performance and the costumes were spectacular.

Phoebe Briggs led the small ensemble from the harpsicord, and the playing was very tight and supportive of the singers.

This was an absolute feast for lovers of Baroque opera.