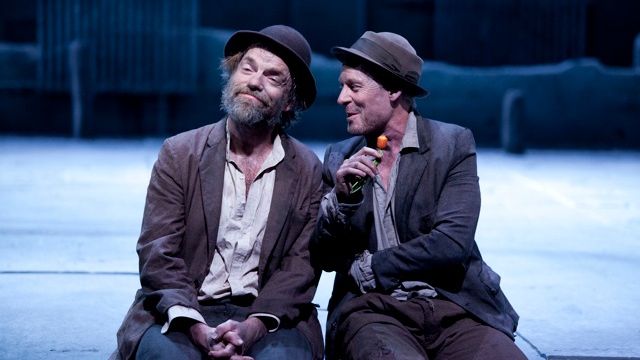 Inherently Samuel Beckett’s classic piece comes with a lot of baggage loaded with mixed messages and high expectations in an absurdist style and context. Or to use a famous Churchill quote, “It’s a riddle, wrapped in a mystery, inside an enigma”. Regardless in theatrical terms it’s a tall order to pull off.

Pairing Hugo Weaving (Vladamir) and Richard Roxburgh (Estragon) in the lead roles appears to be an obvious choice, but credit must be given to Tamas Ascher who recognised during rehearsals for Uncle Vanya the glorious potential of casting these two. But it must also be said that Ascher’s unavailability to direct the show due to injury could be thought of as a blessing in disguise. It is in taking on this unexpected task that Andrew Upton really shows what he’s made of as a director. There’s no doubt that with such a skillful cast his job could be perceived to be easier but the challenge here is to be able to elicit excellent performances while not allowing them to become self-indulgent. It’s a delicate balance and one that Upton achieves. 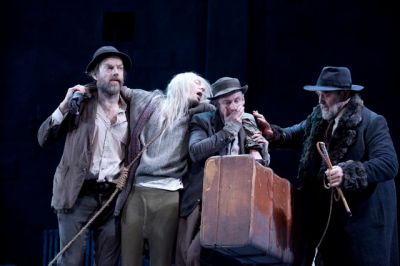 As for the bromance between Weaving and Roxburgh it is absolutely infectious. These two men are so in love with each other (in a platonic way) and they are having so much fun that it’s impossible to resist being swept away with them on a rollicking ride of impeccably timed comedy.

Philip Quast is virtually unrecongnisable and does a wonderful rendition of the puffed-up, pompous and explosively violent Pozzo. And Luke Mullins’ version of Lucky is the unsung hero of the show. The subtle detail in his performance is really quite astounding.

This is a play that needs space to breathe so the choice to use the cavernous Sydney Theatre is the right one and Zsolt Khell’s set design is evocative of a post-industrialist wasteland where lost souls trawl for meaning.

This production of Waiting For Godot is not only extraordinary theatre, but it’s a sublime rendering of an absurdist classic, even Samuel Beckett - who was a notoriously tough nut - would be sitting up in his grave applauding.