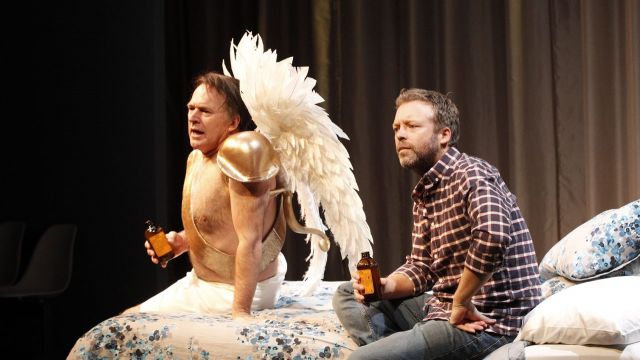 If nothing more The Waiting Room is a lyrical homage by playwright Kylie Trounson to her father, IVF pioneer Alan Trounson.  Our collective social history and Kylie’s personal history, in relation to the development of IVF, is placed under the microscope and framed by the music of the era.  Over all the script is drawn with sincerity and the production full of humanity.

It is a kind and generous work that looks at the good-natured openhandedness and hard working commitment of the scientists in progressing our ability to deal with infertility.  Although it touches on the down side and controversy it treads lightly there.  It is not so much a play describing conflict as a work describing the personal perseverance of a number of characters.

Relationships are tempered with sensitivity and understanding this work is way more about people than ethics. The Waiting Room’s structure, informed by a feminine libidinal economy, is fashioned like many chains of a necklace, vignettes and scenes follow each other linking and interlinking - creating meaning. Kylie Trounson uses a most interesting conceit of having the playwright talking to the audience as if she is still mapping out and writing the work.  This suggests an enduring control over the material and her perceptions of her own experience with in it.

The short scenes are mostly presented in quick and efficient succession displaying quite some slickness in the direction by Naomi Edwards.

A very strong and competent troupe of actors moves deftly both physically and from character to character and, in some instances, from realism to delightful and funny ‘magic realism’.

Sophie Ross plays Kylie Trounson as a comfortable and genuine young woman, while Greg Stone morphs into a liberal, gentle and loving father with great sense of humor in his portrayal of Alan Trounson and, charm as Eros. There are memorable moments of pathos such as William McInnes shuffling around PJ’s and slippers with his back to the audience representing Carl Wood in an advanced stage of dementia.  Belinda McClory, such a consummate and strong actor, convincingly represents the heartbreak of a ravaged young woman unsuccessful in conceiving through IVF after numerous traumatizing attempts.

Much in life is unsure and much is only achieved by dogged determination.  So much has changed in the last four decades.  I remember a time when one was expected to accept one’s lot in life.  When in nice middle class company a child only, ideally, came with a successful and satisfactory relationship.  When everyone seem to be desperately trying not to get pregnant.  But science, feminism and perceived individual rights have changed all of that.

There are some fabulous laughs pertinent to the era that is being examined and heaps to think about in this satisfying production.