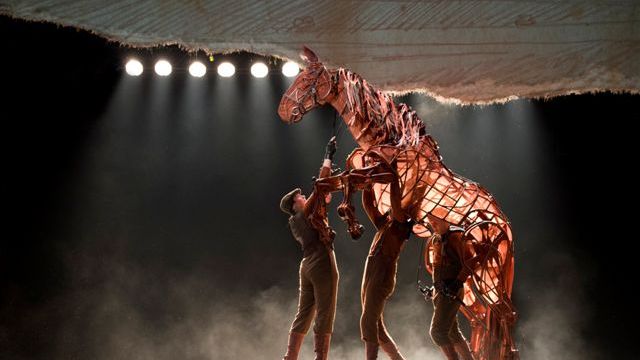 Live theatre has the power to suspend disbelief and nurture evocative imagination. It can create magic. We should always be grateful for that. Last night a huge chestnut hunter called Joey was caught in barbed wire and his legs were being cut to pieces. I was crying into my partner’s handkerchief, unaware and uncaring that this was theatre and I wasn’t even crying for a horse – I was crying for a puppet. That, in itself, is magic.

So much has been written already about War Horse that it seems redundant to say it is a spectacle – such as we expect to see in arenas – and a theatrical event the likes of which we seldom ever see. It is brilliantly staged and mounted (no pun intended) with an astonishing lighting design by Paule Constable, wonderful drawings and set design by Rae Smith (who also designed the costumes) and a great soundscape by Christopher Shutt. It has the astonishing puppets by Handspring Puppet Theatre that we have all seen and read about, operated by amazing puppeteers who manage to make themselves invisible and convince us that Joey and his mate Topthorn are flesh and blood animals with personalities and emotions. It has beautiful music and folk songs by Adrian Sutton and John Tamms respectively. It is a heart-stopping, achingly beautiful theatrical experience and a technical triumph. 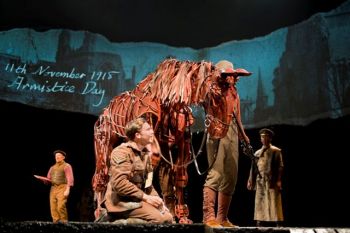 What it isn’t, is a good, totally satisfying and well directed play. When the flesh and blood human characters fail to engage you on an emotional level, something is always missing in the script. That “something’s missing” line was repeated by everyone I spoke to in the foyer and at the celebrations after opening night, and it’s a pity that the script wasn’t more closely scrutinised at least in time for this production, when there had been a distancing of time from the original awe of the spectacle. Some overworked corny dialogue, and underworked story progression saw the play falter several times, and there was a lack of depth in most of the relationships. Essentially it’s a simplistic story reminiscent of Anna Sewell’s Black Beauty: Boy – Albert – falls in love with foal Joey and loses him when his father sells him as a fully grown hunter to the army for the war. The quest is to find him and get him back safely, even though it means signing up and risking his own life along the way.

A play doesn’t allow the luxury of space and time that a novel does, and Stafford has followed the novel faithfully. Consequently, in Act Two, Joey is thrown into an entirely new set of characters, including a relationship between a German Captain Friedrich Muller (Andrew Tighe) and a little girl Emilie (Belinda Jombwe) which takes the story in a completely different direction and severs the emotional tie of the audience to the Albert/Joey journey. We have to rebuild and reinvest with a whole new story thread. It’s a great pity. Then there are the strange directing anomalies, most notably a tear gas blinded Albert, moments after re-encountering a horribly injured Joey, bleeding out from the slashes in his legs, jumps on the horse’s back and rides him. I literally gasped out loud. No-one who loved a horse would ever do that. It was almost surpassed by Albert blithely riding unexpectedly back into his village, months later, on the back of Joey in the last scene – and the lack of any reconciliation between father and son was a sorry omission which suggested that neither had learned anything from the horror and estrangement they had been through. 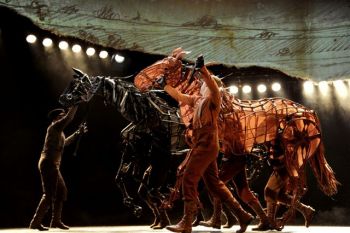 But no matter what the shortcomings of the script, some things transcend evaluation, and War Horse falls into that category. Performances are strong for the most part. Ian Bliss, a well known actor to film and television audiences especially, is excellent as Ted Narracott, Albert’s father, a man branded a coward who has become a bully. Nicholas Bell, one of the most experienced actors in Australia or Britain, brings truth and credibility to Arthur Narracott, Ted’s embittered brother and especially to the role of Sergeant Thunder. Newcomer Cody Fern (Albert) is a promising new talent with the right degree of physicality and innocence. He is believable and engaging and surely has a bright future but, oh dear, his accent started out Devon, quickly became Irish, then added some Geordie and a splash of Yorkshire. Consistency in dialects is an essential tool in an actor’s tool kit, and that was disappointing. Special mention must go to John Thompson and Dave Evans as the songmen, whose music transported us to the time and place and to the wonderful puppeteer who gave such an incredible life-like personality to the Goose.

But the stars are the horses, and the most affecting relationship is that between Joey and Topthorn. Your heart will ache to see how these giant horses move from rivals to become blood brothers. There are images that will stay with me for the rest of my life. The screen/set – a scrap of paper torn from a sketchbook, moving from black and white to the millions of poppies in Flanders field; the agony of Joey trying to pull a huge cannon; the carnage on the battlefield so brilliantly recreated on stage and the awe-inspiring moment when Topthorn and Joey….blinding lights and explosions behind them, leap the barbed wire fence. As a reviewer, it’s my job to evaluate and even criticise at times in the pursuit of a fully rounded opinion. However, as a theatre lover, I can only say War Horse is a once in a lifetime experience. See it if you possibly can.