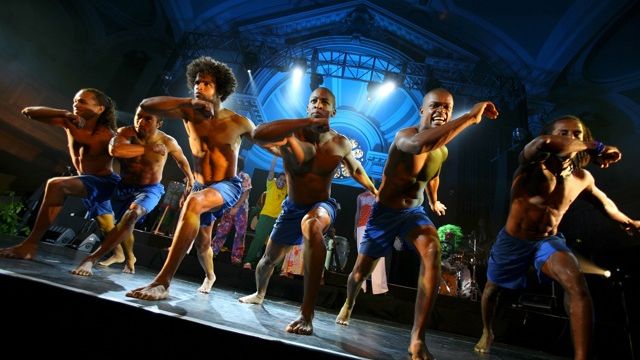 Speed, flexibility, muscle, sweat, six packs and back flips – these men are a force to be reckoned with and thoroughly entertaining! 'The Warriors' are a troupe of young hot blooded, muscle packed men who knock us out with their skill, charisma and dynamite! Having come directly from the gangland warfare in Salvador de Bahia, these boys who grew up in dingy, poverty stricken Favelas of Brazil are now leading the way in exposing the martial art of Capoeira to the world. They are the raw real deal, you can’t get Capoeira performed more authentically than this. They have lived it, seen it and experienced the hardships of life that we can’t even imagine. A place where 60, 000 people are shot dead each year, that’s more than 1000 per week and a place where drug dealing, violence and poverty reign.
Capoeira is an art form that includes martial arts, music and dance and it originates from the African slaves that were brought to Brazil sometime around the sixteenth century. The Capoeirstas appear to speak little English, so the stories are narrated by Bruno Schvidah, he educates us on the life and times of living in Favelas and the backgrounds of the young cast. He also shares with us his personal story about his father who was a drug dealer and as the website says “He was known to have killed at least 47 people.”

As we listen in amazement at the stories of these people we are mesmerized by what this show offers. The performers are so passionate, technically brilliant, powerful and confident. A big painting of the Favelas creates the backdrop. On either side of the main stage the musicians of 'Rhythm Carnival' dazzle and excite us with everything from electric guitars to saxophone. The one female in the show is the gorgeous, glamorous and commanding singer Paloma Gomes who was from Candeal, one of the poorest parts of Salvador de Bahia. She was ‘discovered’ by director Toby Gough and now we have the pleasure of hearing her soulful voice and witnessing her enchanting stage presence.
The show takes us on the journey of how these people live, exposing us to the authentic musical rhythms, the song and even touches on the warfare with a scene where one member runs into the audience and then gets caught and chained. With some minor technical hitches, it’s all within the spirit of the show, which breaks the fourth wall and allows us to step in and become a part of these people’s lives. It finishes with the positivity and glory of ‘Carnival’ which is an annual event in Rio de Janeiro. Gomes encourages us to get out of our seats and experience the samba beats and feel the essence of the Brazilian music. Everyone responds, some people are ferried up onstage and the entire Theatre Royal is moving and dancing to the sensual, earthy beats of Brazil.
Emma Bell