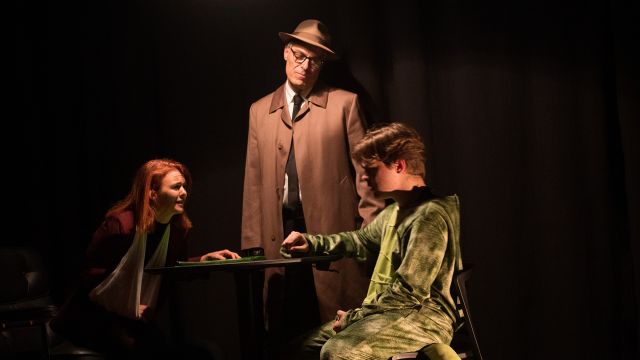 Basil Pepper would have been a beagle had his mother had her way. Instead, he paints fantasy figurines and attempts to work out the deeper meanings of Fred Basset cartoons. Until he meets Delia. She was a caterer at his father’s funeral, but he soon discovers she is so much more than that. She fills his head, he sleeps in her bed, and now he’s full of ideas – and action.

Alex Vickery-Howe wrote this dark comedic tale after yet another year of terrible bushfires, but before the pandemic – which is prophetic, given where the narrative goes. And its invitation, nay, demand, to do something, is more powerful for being played once the theatres have re-opened. South Australian Playwrights Theatre has a vision to create and perform original plays from the state and Watchlist is an outstanding and challenging piece of theatre that stays with you long after you’ve left the theatre.

Director Lisa Harper Campbell guides the great cast around her own stage design: an almond shaped boundary of red gum bark chips: an eye, with an eyebrow at the rear of the stage. Delia’s world of action is within the eye – everyone else’s apathy is outside it. Delia is the only one really looking at the world – and the one being looked at. Katherine Sortini’s Delia is captivating; even when she is in the shadows of the action, you know she’s the reason for what happens next. She conveys the passion, determination, and uncompromising commitment to the cause, whether that be pulling Basil from his inert life into hers or threatening the future of half the human race.

Gianluca Noble is Basil, the boy without a fight or a thought, who grows into what his mother feared. Noble is in almost every scene and he is convincing in his transformation from boy to man. Noble is compelling with Sortini, but he has just as much chemistry with his friend Roger, played by a brilliant Eddie Morrison.

A lot of the comedy falls to Morrison and he succeeds in his uncertainty delivering a eulogy then flipping instantly and confidently to the wake’s DJ. But he is also us, the audience: selectively informed and doing just enough to make us feel comfortable. We sip our wine (Roger’s choice is Moscato) and recycle our bottles, then go back inside to watch the game. Basil first looks to Roger as his role model of how to function in the world – and it’s this interaction, where they finish each other’s sentences with superb comic timing, that cements a backstory we don’t really get to know. Katie O’Reilly is Marie, Basil’s mum – sardonic, she has mostly given up on whatever she believed in. Her backstory is teased from early on, and the reveal is cleverly executed – yet her character never really changes the way we hoped when we finally understand her context. We never really get to know much about her relationship with Basil’s dad, whose ashes sit under a spotlight for the entire play, the urn being this story’s origin.

Matt Hawkins is the other darkness, as Norman, the ‘agent’ who operates outside of the system. Vickery-Howe and Harper Campbell play with Norman and his many alter egos. He is another source of comedic relief, though constantly played straight. He brings fear and a sense of foreboding to Norman, as well as a misplaced smugness thinking he’s in control of everything.

The to and fro from present to past converges through short scenes punctuated by music; Stephen Dean’s lighting helping us in that shift in time and place; and the excellent stagehand whizzes props on and off in her wonderful black hat, maintaining the momentum that builds and builds – and yes, is released. There is huge satisfaction in feeling that energy move in live performance (yet sadly missing in so much of it) and Harper Campbell’s cast and crew carry this responsibility so well. The ‘boy meets girl’ narrative turns from comedy to politics and back again so easily, yet it’s not satire: it’s a frustrated tale of the state of the world that signals virtue but actions nothing important, waiting for ‘some mythical grown-up to take care of it’. Whilst this play is a reflection of our own apathy we see in Roger, our resignation in Marie, and our fear of the surveillance-world through Norman in his many guises – this is a call to arms: to be captivated by the planet as much as Basil is by Delia, indeed, as much as Delia is by Basil, for us to say her words: ‘I wasn’t supposed to like you this much’.