We Can Work It Out. Four Beatles. One Room. No Filter. 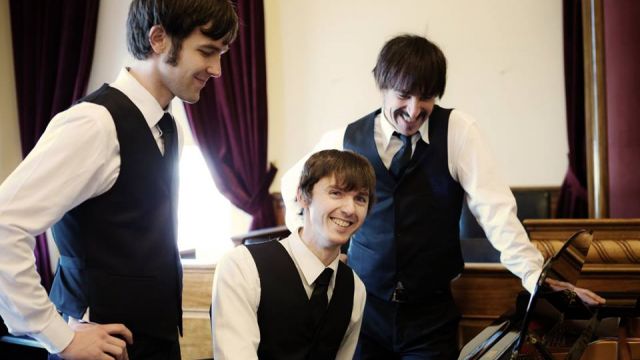 The title tells you what this 2015 one-act play is about.  We’ve got John, Paul, George and Ringo in a room.  We don’t know where – or even why - but it seems they might be on tour – although a single bottle of Scotch in a dressing room seems meagre for such huge stars.  We don’t know when, but the dialogue refers to ‘films’ – plural – so that’s after A Hard Day’s Night and Help!  It’s probably 1965 and – although he’s not named – it’s after they’ve met Bob Dylan (in ’64) because John (Kashmir Sinnamon) has a sudden determination that their music should have ‘something to say’.

But let’s not be too precise.  Suffice to say, the Fab Four are at loggerheads and in something of an artistic crisis.  Gabriel Bergmoser plunges us into a heated discussion of Art and the whys and wherefores of their own success and – the big question - where do they go from here?  More of the same?  A bold step into new territory?  What?

Of course, these characters are Mr Bergmoser’s version or interpretation of the Beatles – which may not be mine – or yours.  George (Troy Larkin, who bears the least resemblance of the four to his character), for instance, is a very angry guy throughout, principally because Paul (Karl Sarsfield) and John reject anything he writes.  His view of Art is that there is some element that touches the heart, that, for instance, a piece of classical music can make you cry.  Does he ever cop derision from cynical (and depressed) John for that! 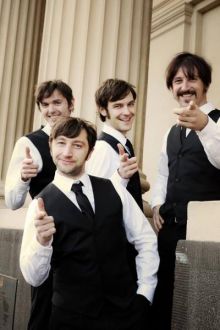 Paul rejects the idea of their becoming a ‘protest band’, and thinks they’re a success because their songs are ‘relatable’ and that’s how they should continue.  This rather timid, play-it-safe version of Paul jarred somewhat, but maybe Mr Bergmoser is a fan of the more edgy John?  This Paul, however, does think they might learn something from, say, the Beach Boys…?  More vicious derision from John, who, as played by Mr Sinnamon (his real name?), comes close to a one note samba.

Of course, things are not all so high flown or philosophical: there are plenty of very personal sources of conflict.  One, a reveal of some past sneaky sexual cheating, leads to fisticuffs.  It’s a bold (and funny) touch, demonstrating that hugely successful, very wealthy young blokes, who can – and did – get all the sex they want, are still insecure boys.

Ringo (Brett Wolfenden) is phlegmatically monosyllabic for the first half, but then erupts into common sense.  Who knew that Ringo could be the voice of reason and the moral centre?  But Ringo knows that this is the best gig he’ll ever have and is very scared of them breaking up.  It’s a good, grounded performance from Mr Wolfenden whose Ringo emerges as the most credible of Mr Bergmoser’s mouthpieces.

This is an ‘early play’ – 2015 – by Mr Bergmoser – although 2015 isn’t that long ago.  Since, he’s had a variety of creditable successes, so why the revival of this entertaining but rather jejune 50-minute piece?  We gather, from a modest program note from Mr Bergmoser, that director Gregory Caine and the cast did some extensive revising.  It does, by its very nature, fit nicely on the miniscule Butterfly Club stage, no lighting changes necessary.  Yes, it is a bit high-class gossip, fan fiction about the imagined angst of the rich and famous, but the opening night audience – a full house – had an obvious good time – and why not?  It’s energetic and its fun.