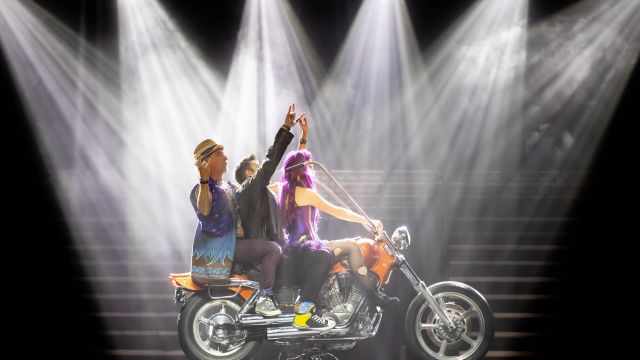 The original production of We Will Rock You opened in London almost nineteen years ago. Despite being panned by the critics, it ran for over three years. The critics obviously failed to take into consideration the wide fan base of Freddie Mercury and Queen. Failed to understand that the eclectic, international appeal of their music would never “bite the dust”! That it would defy “the laws of nature and come out alive” for generation after generation.

That’s why whole families went to the cinema to see Bohemian Rhapsody. That – and the fact that Packemin has such a great reputation – is why whole families are booking to see this production of We Will Rock You. They won’t be disappointed! It is a tight, rollicking musical tribute to Queen, Mercury and the whole production team – producers, director, musical director, choreographer, musicians, designers and the cast of forty-five talented, energetic performers. Described as a “jukebox musical”, We Will Rock You was conceived by Ben Elton, based around twenty-four Queen songs. It is set in a dystopian, computerised future where the population is centrally controlled. Musical instruments are forbidden and rock music is unknown. A group of Bohemians, led by Buddy, strive to escape the iron rule of the Globalsoft Corporation. They put their faith in Galileo, a Dreamer who is haunted by snatches of strange words he hears in his head and a strange vision of a “living rock” and a “mighty axe”.

The musical relies on versatile performers with incredible range and power. They must also to be able to act in order to make the characters believable – and deliver the inevitable humour Elton has used to make the story plausible. And Wayne Scott Kermond has chosen his cast well. 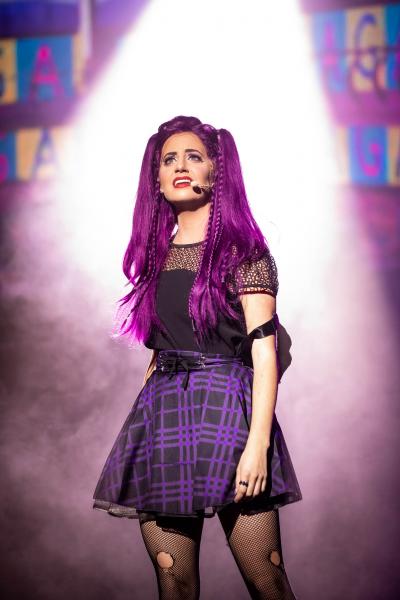 Toby Francis is Galileo. Perplexed by the strange words and phrases that fill his head, Francis establishes a character that is appealingly vulnerable and confused. Then he sings - with all the strength and power that embodies Queen’s music – and Mercury’s vocal range. He radiates confidence, experience and control.

As does Kelsi Boyden as Scaramouche, the tough loner, who doesn’t fit in with her ‘GaGa’ lookalike classmates. Boyden plays the scratchy, feminist Scaramouche with prickly pugnaciousness – and loads of concentrated verve and energy. Then she also sings – and hits the difficult, beautiful notes of Somebody to Love like a feisty, female Freddie. 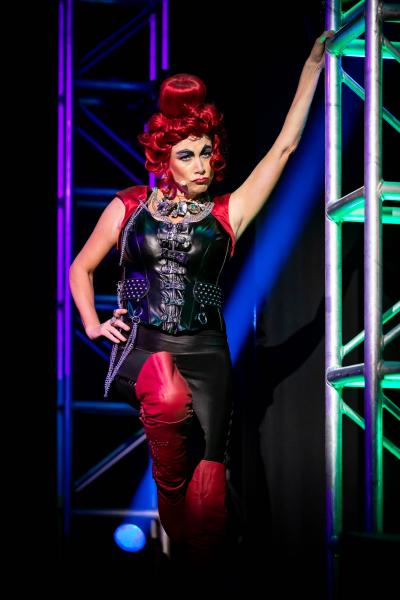 Together Galileo and Scaramouche break free but are relentlessly pursued by Globalsoft’s police commander, Khashoggi, under the orders of the Killer Queen. Cameron Shields and Deborah Krizak play this formidable pair.

Krizak is strikingly intimidating, all heavy make-up, leather, chains, sparks, swirling fabric and lots of red hair. Her Killer Queen certainly commands with the force of “gunpowder, gelatine, dynamite with a laser beam”. Strutting the stage with the sort of “rage that lasts a thousand years”, Krizak obviously relishes finding all the possible malice of this role. Her off-sider, Khashoggi, is much more controlled and Shields plays him with a sustained malevolence. Tall and straight, he commands from behind narrow dark glasses, his voice strangely regulated and compelling.

Escaping Khashoggi, Galileo and Scaramouche are rescued and by two Bohemians, Brit (Eamon Moses) and Oz (Emma Mylott). Moses, in a kilt and swinging sporran is an audience favourite. Incredibly fit, flexible and light on his feet, he injects boundless energy and fun into this role. Lithe and lissom, Mylott matches his energy with nimble vigour, faithfully supporting his belief in the Dreamer. Brit and Oz take Galileo and Scaramouche to meet Buddy, played by director Wayne Scott Kermond. No stranger to the stage or the music of Queen, Scott Kermond revels in the possibilities of this role. His Buddy is just a bit quirky, light of foot, Puckish - breaking the fourth wall with rascally comments and impish winks.

It is not these characters alone that make the production so outstanding. They are supported by an ensemble of talented singers and dancers who populate the stage with passionate zest and vitality. Choreographed by Katie Kermond, some are the very disciplined, white-clad “GaGas”; others are the Killer Queen’s writhing, scantily clad acolytes; all are the colourful Bohemians, expressing their chosen pop star characters in a range of eccentric ‘bits and bobs’ and clever dance routines. Costume designer Audrey Currie has had a ball with this production! 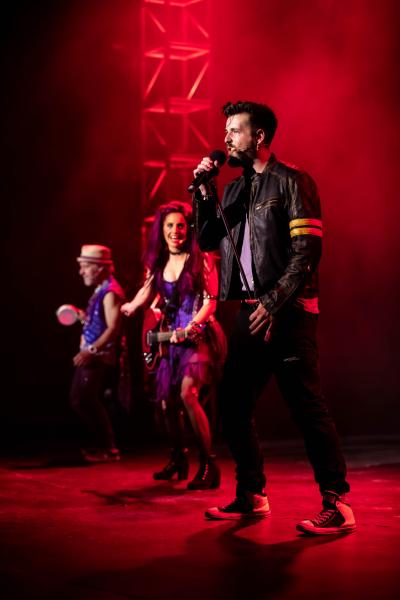 And then there are the musicians! Led by Nicholas Griffin, they bring find all the eclectic, idiosyncracity of Queen’s music. The little bits of opera, the touches of soul and blues … and the Rock! Griffin and Anthony Cutrupi on keys, Michael Napoli and Tim Robertson on electric guitar, Amanda Jenkins on bass, Fatima De Assis and Peter Hayward on percussion and Charlie Kurthi on drums rocked the audience with their power, passion and precision.

Technology is an asset in a production such as this. Projections and lighting effects allow greater freedom on the stage whilst seeming to take the production beyond the confines of the stage - even beyond the present to an Orwellian future. Scott Kermond has directed this musical with passion. He has produced a fast moving, tightly directed production that pays homage to Queen’s extraordinary “anthem style music” that was able to “unite a world and transcend generations and race”.

Don’t miss it! It will sell out fast.