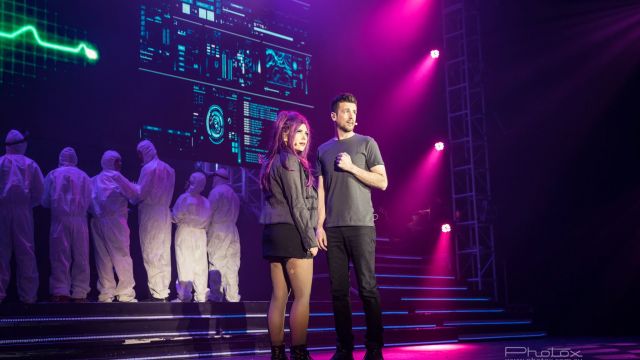 We Will Rock You takes place in a future where all communication is by social media, all music is digital, and all dance is pre-programmed by an evil video game boss come to life. Enter Galileo Figaro, a school senior who has visions of an analogue world; Scaramouche, his sceptical, feminist love interest; and the Bohemians—rebels with a dream of a time when people could make their own music. So that’s the story in a nutshell, but whatever the excuse this show is all about the music; the extravagant, complex theatrical legacy left to the world by the inimitable Freddie Mercury. And it is brilliant.

I’m going to confess, when I saw the Sydney production as directed by Ben Elton himself in 2016 I really didn’t like it much. It wasn’t the production or the performers—it was the script, containing the world’s most dumb premise for a tribute show. Very silly story, tenuous links with the original songs, lame lyric references from end to end and obviously cobbled together to capitalise on peoples’ love of Queen and Freddie Mercury with very little of Freddie’s spirit at all. So what made the Canberra production better? It was the same awful jokes arguably not so overlaboured. But more than anything else, it was in a stadium and the staging was far more suited to the music. 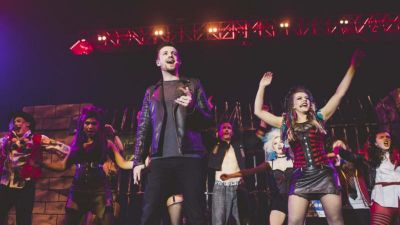 Toby Francis (Galileo) has a vocal range and strength approaching Mercury’s, and Erin Clare (Scaramouche) has a marvellous stage presence and the voice of an angel. They come together really well on Hammer to Fall and Under Pressure although in the latter, the mixing could use a tweak since Clare’s voice was possibly a bit under amplified. Samantha Marceddo as Oz and Dave Smith as Brit are incredibly strong and with some obvious chemistry. And then they’ve brought out the big musical theatre guns for the villains. Khashoggi is played by one of Canberra’s favourite big voiced tenors, Max Gambale, who gets to stretch to his impressive full range on Seven Seas of Rhye. And arguably the best thing about the show is the magnificent Queenie van de Zandt as the Killer Queen. Clearly relishing the role, which is essentially Red Queen meets Ursula, van de Zandt dominates the stage and fills the stadium with her voice.

The choreography is great—everything from classic show girl pieces through to jitterbug and swing (on the classic 50s-influenced Crazy Little Thing Called Love). But what really makes it work is that the production was treated like a rock concert.  The early LED graphics have the same pixelated retro feel as the ones used for the revival of War of the Worlds and lend to the prog rock atmosphere, but most of all, the light show here is just spectacular (be aware that there is a lot of strobing if that’s an issue). The designer Phil Goodwin is one of Canberra’s laser lighting heroes. His work on smaller stage is less confident but put him in a stadium and he blows the audience away—and he did. And the audience clearly loved it.

Steel yourself against the lame story. Go see this for the top-class music rock show that it is.