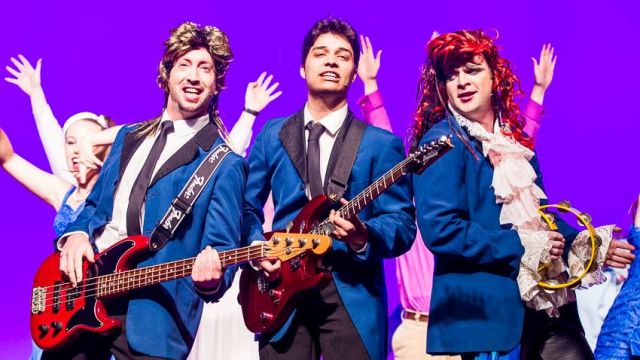 Hornsby Musical Society’s The Wedding Singer is a cube of bright 80s-era romcom fluffiness. The bright set, costumes, and of-the-era pop score of original tunes make for a pleasing night.

The musical is a faithful adaptation of the Adam Sandler/Drew Barrymore film from 1998. In this show I felt the women were the stand out highlights. Rosemi Hart as leading lady Julia, Chloe Horne as “sidekick support” Holly, and Yasemin Tounjel as the “evil ex” Linda all shine in their roles with great singing and the right approach. The impressive standouts among the men were Timothy Selby as the Boy George-clone band member George (his over-tight 80’s faux-leather pants left nothing to the imagination) and Boshko Maksimovic as the pitch-perfect two-faced Glen. Sue-Rowe Hurndell rightfully stole the show with her grandma rap. She wasn’t the only scene stealer: the cache of Las Vegas celebrity impersonators who turn up near the end of Act 2 were a joy to watch and added some lift to the finale. 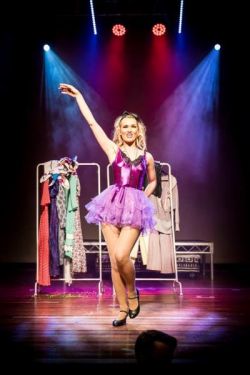 Andrew Castle’s direction is staid and polite, effectively keeping focus where it needs to be and telling the story. It’s annoying when directors and choreographers block too much movement for nearly every syllable, so it was nice to see the direction and dance paring it back. However, given the nature of the show a little bit more movement and OTT-factor would not have been out of place.

Mark Pigot’s talent as MD is at its usual excellent standard, leading a band mixed with experienced players and fresh new young blood: this combo gave the music some great kick and life without compromising on musicianship. 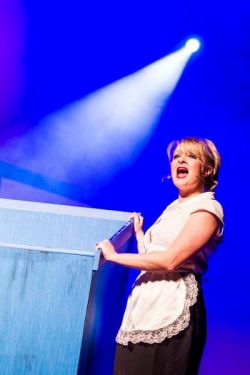 faced with a cast of non-dancers: provide simple yet effective moves that makes everyone look good.

And yes, a show set in the 80s features a set based on a Rubik’s cube. Omigosh who’da  thunk? What’s clever about the set is what designer Slade Blanch has done with it – one side of each cube dominating either side of the stage with exits and entrances for extensions hidden within.

In his first lead role as the titular Wedding Singer Jerome Varlet-Green didn’t convince me he was fully committed to the role. Yes, his lines were right but he could have done with some more reinforcement from the director. It’s clear he’s talented but I felt he could have given more, and in what seemed like an opening-night thing, not all of his big notes hit the mark.

The Ensemble work hard and it was clear they were enjoying themselves. There were a couple of times when some of them dropped character or energy: this happened when some of them were upstage behind those further down. Audiences notice every little thing on stage – no matter who or what is in front of you. 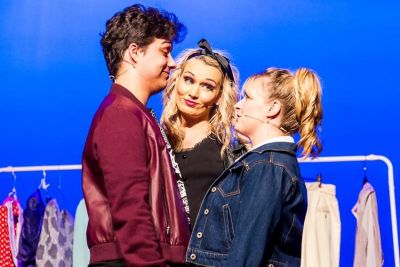 The villain of the piece is the venue. The auditorium is a vast echo chamber from a circle of hell. This may not be a problem if you’re sitting near the front or mid-way, but those of us up the back heard mostly furry waffle, especially in the ensemble numbers. I can’t stress enough this was not the fault of the cast (it was clear they were enunciating), the MD, band, or Loud and Clear’s sound design, which ensured the singers were heard over the band. Sometimes the best cast and crew aren’t able to overcome the innate challenges of their surroundings. Don’t let that put you off: the plot and songs are straightforward enough, so you’ll get the gist of what’s going on. More importantly the singing was tuneful while inside the waffle house. 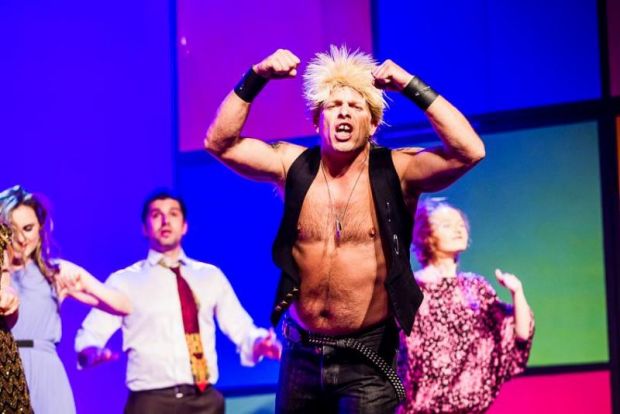 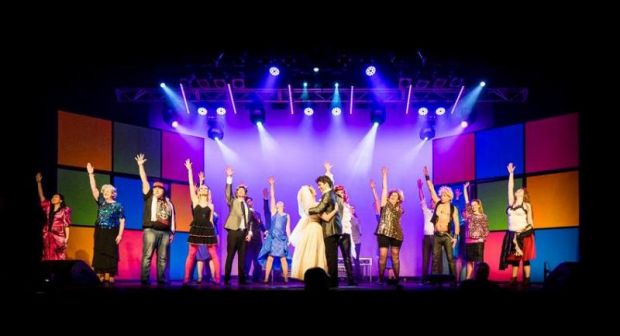