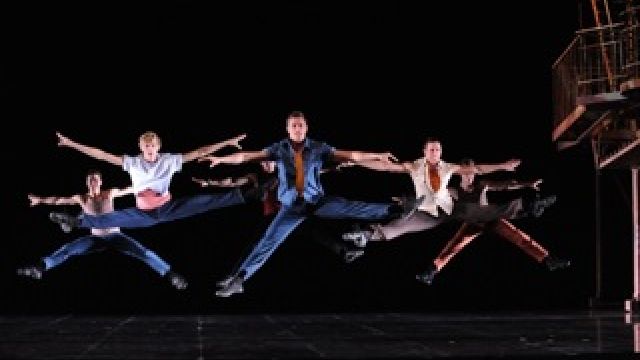 West Side Story is the modern retelling of Romeo and Juliet, set in New York City in the 1950’s. It is based around young protagonist Tony of the ethnically American gang the ‘Jets’ and Maria, sister to Bernardo, the leader of the ethically Puerto Rican gang known as the ‘Sharks’, and the forbidden love they share amidst a turf war fought between the two rival groups.

This production, directed and choreographed by Joey McKneely, with musical director Donald Chan, is an excellent envisioning of the piece, and has a very polished and professional feel. The show features a reduced 18 piece orchestra, but does not suffer for this, producing quality sound under the skillful conductorship of Vanessa Scammell. The only issue is occasional drops in volume to cast microphones, which leaves the orchestra drowning out the lyric.

Set Design by Paul Gallis is very functional and towers over the audience. Despite its functionality it goes relatively unused in most of the show, acting more as a backdrop than levels for placing the action. The set looks even more impressive with lighting design by Peter Halbsgut, though occasionally the combination seems to descend into a scene from Les Miserables, and you momentarily forget what show you are watching. Black and white projection of New York street-scapes works effectively with the towering scaffold, especially in the under bridge fight scene and the closing montage. 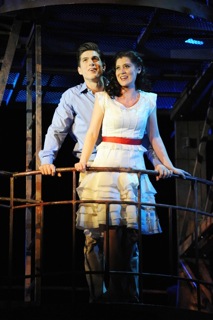 In the lead roles of Tony and Maria, Josh Piterman and Julie Goodwin are both excellent. A few off notes sung by Piterman on opening night were disappointing, but his vocal control was always impressive and his rendition of ‘Maria’ was beautiful. Goodwin is a powerhouse and easily stole the show with her superb operatic voice. Her rendition of ‘I Feel Pretty’ was an audience favourite.

Other popular numbers included ‘Gee, Officer Krupke’ by the boys, and ‘America’ by the girls, though this was one of the numbers where the mics were too low in the chorus. Choreographically the show was very strong and featured lots of the well known finger clicks and group leaps. Synchronicity was top notch, and the timing and skill of the cast could not be faulted.

Perhaps most surprising, however, is the acting, which really stood out in this production, and is a credit to all of the lead players. Kudos to both Piterman and Goodwin, as well as Alinta Chidzey as Anita, Nigel Turner-Carroll as Bernardo and Rohan Browne as Riff, for their intensity and commitment to their characters. The director is quoted as having said that this show is “all about the dancing”, and there’s no doubting that’s what its most renowned for, however this cast have gone emotionally above and beyond and deliver a heart wrenching, exciting and sometimes shocking performance.

Definitely try and see this show. For first timers and fans alike, it is a production that can be enjoyed by all.

When this production of West Side Story was dancing it was exhilarating musical theatre. This young company, the youngest that has ever presented the work in Australia, brought an exciting raw energy to the Bernstein and Robbins classic.

From their opening “Prologue,” through “Dance at the Gym” to “Cool,” the “Jets” and the “Sharks” took hold of the show and powered it through to show-stopping ovations.

Josh Piterman was a likeable, if rather too square Tony, but his duets with Julie Goodwin as Maria, “Tonight” and “One Hand, One Heart,” were highlights. Alinta Chidzey’s Anita had the requisite Latin fire the character demands, and danced and sang it brilliantly. It was the best performance of the night.

West Side Story is not an easy show to do with the performers not only required to be more than accomplished ballet dancers, but also have near operatic voices to handle the score. That this company did it so well is testimony to their talent. The Act One “Tonight” quintet was quite outstanding. 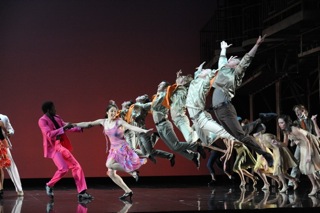 One of the main problems with the show has always been the clunky drugstore scenes, but in this production, thanks to some good work by Frank Garfield (Doc) and Christopher Connelly (Lieutenant Schrank) they ran smoothly.

“Gee, Officer Krupke” drew some laughs, but not nearly enough due to a muddy sound mix.

Although the dancing and singing carried the show, overall the thing that was missing was an emotional connection between the performers and the material. It wasn’t helped by Vanessa Scammell powering through the score at breakneck speed.

The set, which was supposed to suggest the tenements, was far too busy, but the rear black and white projections of New York circa 1950s helped tremendously with the feeling of period, as did Peter Halbscut’s lighting design.

The flaws, however, were minor in what was otherwise a fine production of a landmark musical theatre work.