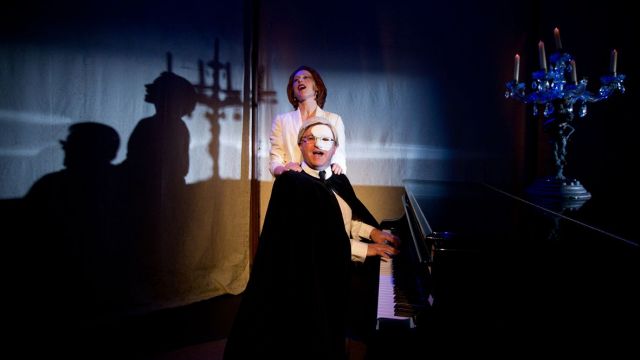 Drew Forsythe as the flamboyant Geoffrey Robertson walks backwards along the wharf behind the STC. With hands clasped, eyes focused intensely on the camera, lips relishing every beautifully articulated syllable, he explains the origin of the Wharf Revue … before making an untimely exit!  What an inspired opening to this celebratory ‘edition’ of the continuing collaboration of a very clever, talented team!

As expected, the show then swings into a string of sketches that leave very few politicians – past and present – ‘unroasted’. From John Howard facing his final election to Bronwyn Bishop in full chopper flight, they are pilloried unmercifully in the nicest possible way by three very perspicacious observers and intelligent writers. Forsythe, Jonathan Biggins and writer/musical director Phil Scott are a formidable creative trio. They, and Amanda Bishop, are also very skillful all-round performers who have mastered the split second timing and panache essential for revue. The better production elements being afforded the team by the STC over the past few years have led to increasingly slicker presentations.  Stepped rostra in front of a wide screen allow clear sightlines, always important when touring to different theatre spaces. Lighting (Matthew Marshall) and sound and video (David Bergman) are as carefully designed and coordinated as the timing of the performers themselves. Video sketches also serve as clever introductions to the sketch that follows, ensuring seamless continuity and necessary fast pace.

Every audience member will recall different ‘highlights’. It might be the video of ‘Clive Palmer’ and ‘Gina Reinhart’ riding high on the prow of the mining Titanic. Or Biggins and Bishop’s tight-clad tribute to the Greek economic situation via parodies of Grease – “we got bills multiplying”. It might be a very effective look-a-like of Jackie Lambie struggling with the alphabet and mis-pronunciations. Or ‘Julia Gillard’ and ‘Kevin Rudd’ re-writing Phantom of the Opera. It might very likely be Les Liberales manipulating a coalition of barricades.

My highlights are theatrical. Firstly there is Qantas’ Alan Joyce in a parody of James Joyce’s Finnegan’s Wake. After seeingOlwen Fouere’s Riverrun earlier this year, it was a delight to hear how acutely the writers were able to crucify Joyce (the business man) using the alliterative, repetitive style of Joyce (the writer)– and how deftly Forsythe presented both! Later an adaptation of Dylan Thomas’ Under Milk Wood saw all four performers transported to Wales, the proud homeland of our first female prime minister. Once again the verisimilitude of the writing style was excellent – but so too was the satire and the static performance.

These four performers are incredibly versatile.  In a variety of styles from song and dance to light opera they have presented an annual revue that is just a little more satirically biting and just a little more professionally staged each year. Don’t miss this, the 15th Celebration of their amazing talents.