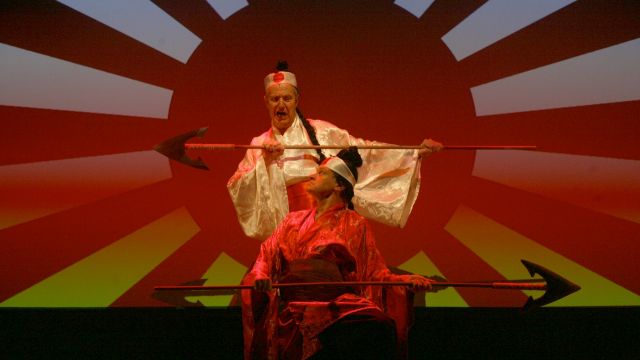 In a champagne year for political drama you’d think that political satirists would be in nirvana. But in this the 11th Wharf Revue, many of the Federal political gags didn’t quite reach the mark.

The Tony ‘Abbotar’ sketch was curious. He rose to the stage with blue skin, red speedos and the theme music from Jesus Christ Superstar.

Julia (the first Prime Minister without a willy) Gillard was sweet as little Red Riding Hood. In her basket was a batch of fully costed election promises. She was offering the goodies not to Grandma, but the three Independents.

This was all amusing and cute, but why was there no reference to the way she became Prime Minister? Surely there should have been a knife in the basket?

The best political humour came in the Boulevade of Broken Dreams where Bob Hawke (who was actually sitting in the audience) and Kevin Rudd lamented their fate as Prime Ministers who’d been cut down. Both had issues with their ‘stimulus packages.’

The New South Wales Government has inflicted so much ridicule on itself that the Wharf Revue team was overwhelmed with material. There were plenty of belly aches when David (not the singer) Campbell came on stage in his towel fresh from a visit to Kens of Kensington and the gorgeous Premier Kritstina Keneally strutted around the stage. The Opposition Leader also copped it. We met Barry bottom of the Barrel O’Farrell.

The best of the night was outside the Houses of Parliament. The opening send up of the ABC’s Q and A program and all the intellectuals who appear on it was a work of art.

Another highlight was the Eurodivision Sovereign Debt Song Contest. Forget intellectual jokes, this was more like a sophisticated version of The Footy Show. The audience loved it. Phillip Scott as German Chancellor Angela Merkel was hysterical.

And for Gilbert and Sullivan buffs like me, what better way to finish the evening than with a selection of music from The Mikado. The Gentleman of Japan and their ‘scientific’ whaling expeditions were the target. The good folk from the Land of the Rising Sun were investigating whether whales can swim once they have had their tales cut off. It even brought a tear to the eye during A Wandering Minke I.

The team got the big tick of approval from the boss. At the after show speech co-artistic Director Cate Blanchett said The Wharf Revue team can keep going ‘forever’.

So I guess we will be seeing them on Zimmer frames.

Image: Jonathan Biggins & Drew Forsythe in Sydney Theatre Company’s The Wharf Revue: Not Quite Out of the Woods. Photo by Tracey Schramm