The Wharf Revue 2014 Open for Business 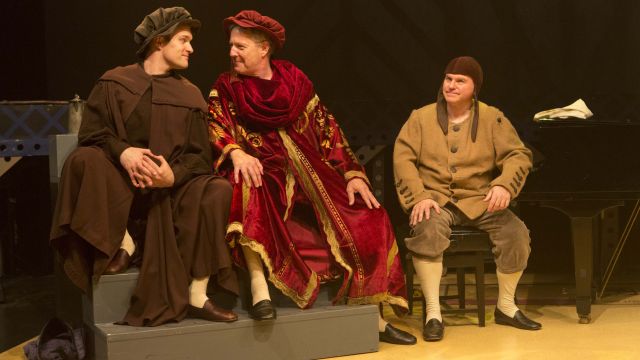 Like a beloved TV sit com, the Wharf Revue team returns every year with ever new hysterical laughter and that shared warmth of seeing an expert team again making merry from cant and pomposity. Incredibly, creators Jonathan Biggins, Drew Forsythe and Phillip Scott have been delivering it since the turn of the century.

Onstage, Biggins has continually provided that central compass to all that is best with this political satire – a wit in scripting and mad metaphor, a perfect still drollery in presentation and rubbery skills at mimicry, as well as dance steps and song.  As a performer, he’s joined this year by Scott, who doubles as musical director and pianist, by regular Amanda Bishop and new boy Douglas Hansell.  The masterful Forsythe appears only in film, as new Speaker and aspiring Dame, Bronwyn Bishop, and an hilariously ancient Rupert Murdoch (excitedly anticipating his regular injections of stem cells harvested from schoolgirls). 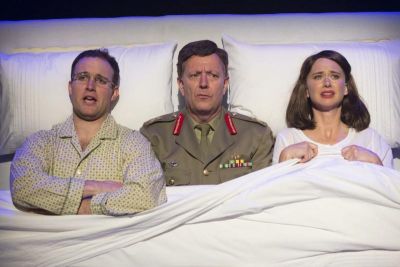 Biggins finds good excuse to revive his glorious, now aged Keating who, with Amanda Bishop’s famed Gillard, can with sticks and soft shoe shuffle still throw the switch to vaudeville.   Bishop exemplifies this team’s artfulness with her crystal portrayal of Julie Bishop as a perfected puppet of UN proportions.  Similarly, a well-produced sketch powerfully mocks the machinations over abuse within the Catholic Church without necessarily striving for full belly laughs.  The Wagnerian version of Peta Credlin the Opera, however, leaves no laugh unturned.

Hansell’s good singing added to the musical power of this quartet and his ranting version of Christopher Pyne as Christopher Robin saying his Prayers  dispelled any first doubts about Hansell’s reach for broad comedy.

The miracle is that the laughs keep coming, whether on M-Anus Island with Hassan’s Heroes, inbedded with the Morrisons or following Blinky Bill Shorten aimlessly through the forest with his unionised koalas.  Popular old TV shows remain a powerful inspiration for political good!