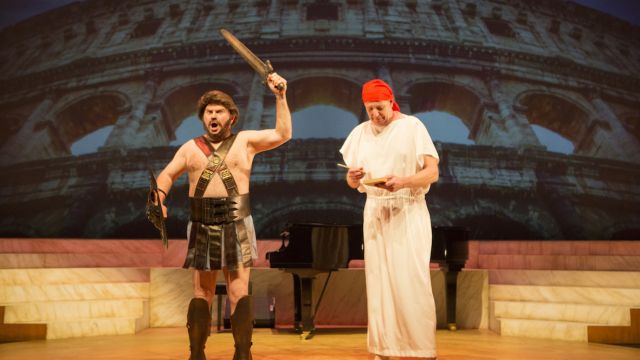 That clever trio is “Back to Bite You” with a program that makes the most of a year that has, both locally and internationally, lent itself to ridicule and revue. And where better to set their snappy snipes than on the steps and columns of Ancient Rome – or Australia 2016 AD.

Jonathan Biggins, Drew Forsythe, Phil Scot – and this year, Katrina Retallick – in white togas edged with Patrician purple, sink their pernicious teeth into the inner circle (and ousted arc!) of the federal coalition. The ‘latin-ising’ of their names (Ericus Abettus, Matius of Belgium!) borrows a little from The Life of Brian but is funny nevertheless and provides an on-going gag.

Biggins as Antonius Abbotus does a daring fan dance in red speedos; Retallick is staringly stunning as Julie Bishop, playing one faction against the other; and Forsythe, in a white Stetson trips beautifully over his words as Ted Catter(us). However, designer David Bergman’s judicious editing of live video clips emphasises the more serious fact that some politicians (like Kevin Andrews for instance) come back to bite themselves!

The foursome sinks their teeth into the new Senate as well. Forsythe and Retallick take a few nasty nips at Pauline Hanson and Jackie Lambie, but it is Phil Scott in wig, beard, bare chest and gladiatorial leather as a sword swinging Derrin Hinch who raises the most laughs. On the international stage, two sketches are remarkable for their ingenuity. Firstly, Jonathan Biggins’ military briefing on the situation in the Middle East is an unbelievable string of alliterations that it must have been as difficult to write and learn as it is to deliver – and he never misses a beat. Secondly is Disney on Isis, with Retallick as a friendly turtle singing up the peace of the deep.

In the last few revues, there have been sketches that are more serous, poignant introspective. This year, Phil Scott at the piano sings two solo parodies: one biting at the much-debated Plebiscite – the other, a bolder and more challenging ‘mastication’ on terrorism.

In another solo spot, Drew Forsythe pays tribute to the late Bob Ellis and ruminates on others who have sadly left the creative stage.

The final fearless ‘bites’ are based in America and those Presidential Primaries, Trump and Clinton. Both receive a bagging in a segment that is clever and funny, but perhaps a trifle too long. That this is also the finale takes away a little from the major, local content of the show.

Nevertheless, the 2016 revue is just as stinging, just as topical and just as cleverly constructed as we have learnt to expect over the last 16 years! It is on tour at the moment but moves back to its Hickson Road home later in the year.