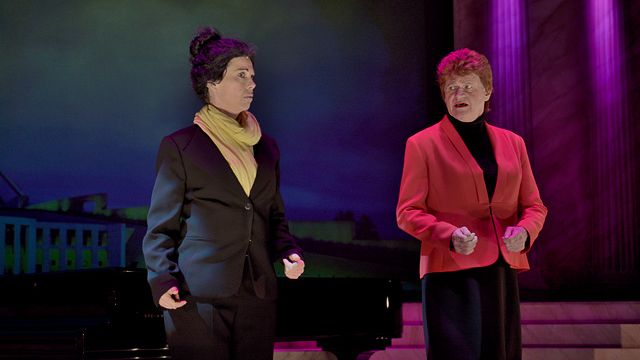 With each year’s Wharf Revue, I’m surprised by the creativity and skill with which the Wharf Revue team turns existing songs, plays, films, and other cultural staples to good use in spotlighting the contradictions and doublespeak, the double standards and hypocrisies, the meaninglessness and frank absurdities that pervade Australian political life.

Much of the action is set in Ancient Rome (16 BC to AD 2016), and, as is their gift, the quartet performing it (three of whom also wrote it) used the highlighted historical parallels most entertainingly to show how little we have learnt, in twenty centuries, about how to manage the most manipulatively dishonest amongst us as they connive to lead us into their particular webs.  But the revue is eclectic, and this year borrows from My Fair Lady and other productions to have fun at the expense of the left, the right, and the middling.  Even the Americans and the Brits were within striking distance, and the revue took no prisoners in bringing down one or two old campaigners there.

One of the revue’s most entertaining aspects was, as usual, the cleverness with which it adapted the lyrics of well-known songs (“Anything Goes”, for instance; “Don’t Rain on My Parade”; and “The Rhythm of Life”, a difficult song done surprisingly well) so fittingly to today’s current affairs.  And the musical richness of these adaptations is not at all let down in their delivery: lively piano work, tuneful singing, and accurately pitched clever harmonies make the revue as rich a musical experience as a comedic one.