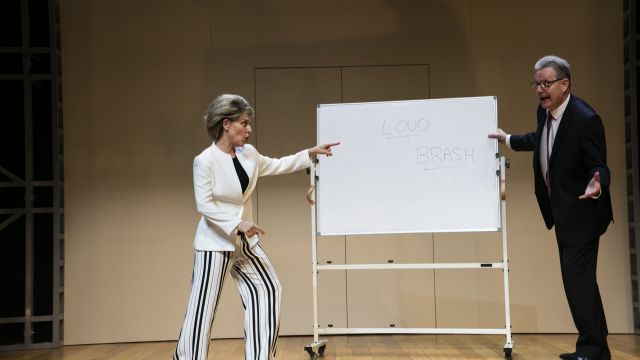 The insane pace of intrigue in Canberra of late is a mixed blessing for satirists. While, the material is bursting out of Parliament House on a daily basis, the current news cycle is so crazy that the writers of a show like The Wharf Revue need to sprint to keep up. This was the first show without composer Phil Scott, whose music was so much a part of the revue’s successful formula. And that was even before Drew Forsythe (both a major performer and half of the writing team) fell ill and had to withdraw from performing for six weeks. Despite all this, they’ve pulled together a very enjoyable show, although they seemed to have relied a little bit on older characters and material.

There are some figures who are instantly recognisable. An evil fairy godmother strides out in a ballgown, his curiously ape-like muscle-bound swagger, lifesaver’s cap and facial grimaces with disturbing tongue movements were unmistakably Tony Abbott. Abbott is far too good a character to abandon however irrelevant he now is, but Eric Abetz and Kevin Andrews have arguably had their day. That said, the audience loved Jonathan Biggins’ Paul Keating, dredged up to offer an acid assessment of the political farce currently in office (and possibly to fill the space of Forsythe’s Pauline Hanson, who was sadly missed). I would have liked to have seen more done with the character of Scott Morrison, although perhaps Morrison’s blend of smarmy blokiness have only become apparent in the last month and therefore too late for this season.

However, the presence of older, safer characters doesn’t make it any less funny and anyway, there were plenty of more current characters. That stiff man with limited facial movement, vocabulary and hair, perfectly encapsulated the decidedly finite mindset of Peter Dutton (a perfect characterisation by Douglas Hansell). All four men get to muck about with Mathias Cormann’s accent in a piece inspired by the Book of Mormon, and heading overseas, Trump, Berlusconi, Putin and Syria’s Assad’s song about their leaders for life club is pretty funny if you don’t think too hard about the reality behind it all. Referencing the plastic bag debacle, the team’s Stomp-inspired percussion piece using plastic bins was very nicely done.

Drew Forsythe’s role has been filled ably by Simon Burke, who was particularly excellent as a quietly dignified Queen in the face of Biggins’ Trump, who was Trump (need I say more?). My favourite, however, was newcomer Rachael Beck, a quadruple threat if you count her comic timing. Beck makes a sultry Stormy Daniels, a petulant, trapped Melania and a screeching Michaelia Cash. Less successful was Beck’s version of Malcolm Turnbull as Cinderella, but Turnbull is a difficult character to pin down, not least because in his attempt to make himself a small target he made himself very, very bland.

This is only my third Wharf Revue, so I’m going to quote a friend who has seen all fifteen of them and who rates this show well into his top five ever. It’s always fun and if you’re a political junkie with a taste for well-crafted gentle musical satire you’ll probably love it.