What the Butler Saw 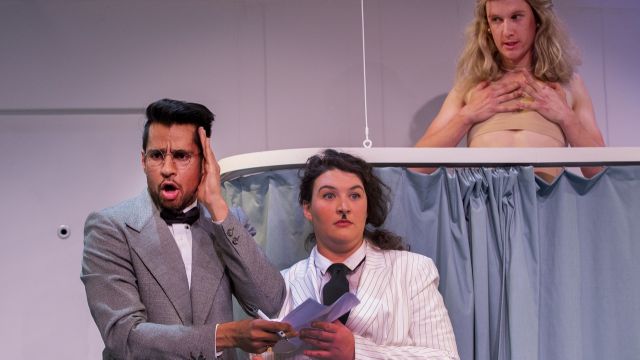 Director Danielle Mass has brought Orton’s provocative attack on hypocrisy somersaulting into 2018 with her cunning cross casting and precision-based direction. She has swept together the farce and the facetious in a production that heightens Orton’s comic genius – and the contemporary relevance of the inequalities that he satirised so subversively … and so well.

The play opens with Dr. Prentice, a psychiatrist, trying to seduce a prospective secretary, Geraldine Barclay, in a job interview. When his wife enters, he attempts to cover up his activity by hiding the girl behind a curtain. But his wife, who is being blackmailed by Nicholas Beckett, promises Nicholas the post as secretary. Add to this confusion, a self-serving government inspector, Dr Rance, a police sergeant, lots of costume exchanges, drugs, alcohol, lust, nudity and a panto-like ending – and you have what New Theatre adroitly advertises as: “this darkest of farces, stuffed full of twists and turns, mishaps and changes of fortune, coincidences and lunatic logic in which six characters gradually lose the plot, their wits and/or their clothes”. The chaos thus described is accentuated by the sleek realism of production designer Tobias Manderson-Galvin’s set. Cool green and stark white; clean lines and sharp edges; and an obligatory sky-light invoke the institutional reality of the clinic. Careful construction ensures no slamming door causes a wall to shudder. The set is stable and secure – despite the fact that what happens on it is anything but.

Maas and her cast have honed this production to emphasise the qualities that make farce … well … farcical. It is fast-moving and fast-talking. The actors pose and posture with hilarious precision, and – because of the casting – in doing so add layers of innuendo and dimension to the characters and the plot.

Ariadne Sgouros is Dr Prentice. With tight-lipped, ‘upper class’ drawl and quizzical expression, Sgouros makes this role as falsely straight as Orton might have wished – and a perfect contrast to the posturing elegance and contained physicality of Jake Fryer-Hornsby as Mrs Prentice. Together they pace and pose, emphasisng the satire, and pulling off some cleverly timed gags involving bottle-opening, flowers and a brief case.

Amrik Tumber plays the interfering Dr Rance with bold aplomb. Rance embodies Orton’s biting criticism of figures of authority and Tumber uses mischievous expressiveness to deliver lines such as: “Civilizations have been founded and maintained on theories which refused to obey facts”.

Casting Martin Quinn as Geraldine Barclay was another of Mass’ astute decisions. Tall, lithe, and athletic, Quinn mixes naïve gullibility and wide-eyed innocence to create this character that typifies Orton’s empathy with the working classes– and the wit with which he portrayed them. In similar vein, Madeleine Carr plays the impudent Nicholas Beckett, a bell boy trying to eke out a living by seduction and blackmail. Carr takes on the male role with almost boyish gusto. She too relishes the physicality and pace demanded of Maas’ direction.

Andrew Guy plays the smaller – but no less satirical – role of Sergeant Match. Dressed more as a cossack than a copper, Guy finds the comedy in the character – and makes an impressive descent into the final scene.

In her notes, Mass says of her casting decisions: “The subversion across all roles tends to open up the play … this feels appropriate given the numerous conversations about gender and sexuality in the twenty-first century.” That is definitely so – but they also serve to make the production just that bit funnier and more farcical.