What the Butler Saw. 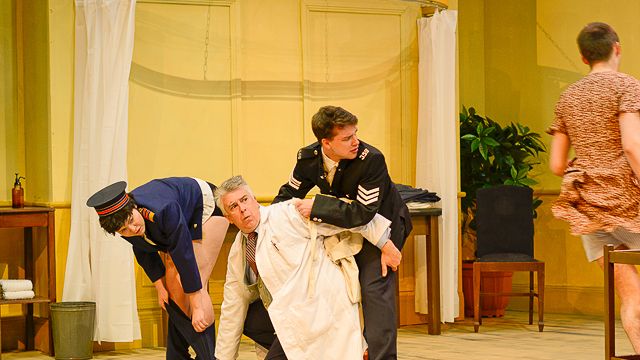 In What the Butler Saw, a mental asylum’s resident psychiatrist’s attempt to cover his attempted misbehaviour becomes increasingly complicated as his wife imposes on him to hire a different secretary from the one he has just hired and hidden and his district psychiatric inspector imposes his own psychiatric judgement on all and sundry, including a policeman and his quarry.  Joe Orton penned this, his final play, in 1967.  Mental asylums tend to be more humane now than they were in the 1960s, but its underlying concern with the abuses that institutional power over others enables keeps the play utterly relevant to today’s institutional victims; but it makes its point comically.  Though physical antics — disguises, confused manhunts, lost clothing, etc. — contribute to it, the play’s comedy comes about largely through what we see of its characters’ thought processes.

REP’s set for What the Butler Saw, straightforward but effective, depicted a large office in an old hospital building, its various entrances enabling closely timed entrances and exits that contributed to the farce.  Such timing was crucial: the characters, well cast, interacted with energy so frenetic that line delivery left the audience little time to anticipate or savour the jokes.  (This being only a preview performance, I imagine that future performances will probably settle into a saner pace.)  Neither was it possible to seriously suspend disbelief in any character — which may be the major aim of this production’s handling of it.

Costumes, integral to the plot, well suited the era (and English setting), and having several fit more than one character must have taken some ingenuity.  Lighting was, as usual in REP productions, faultless, as was the sound.  The seating, of course, spaced the audience out, possibly altering the cast’s perception of audience response; but the audience’s enthusiasm was genuine.