What Rhymes with Orange? 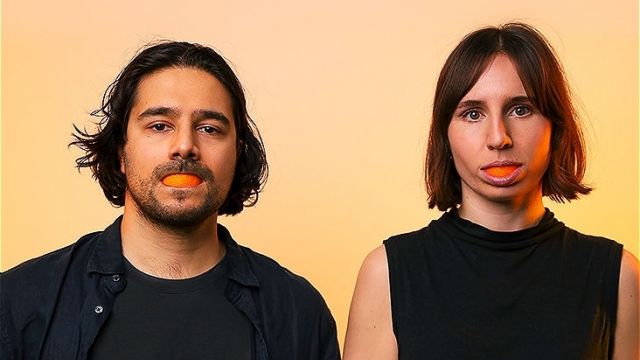 What Rhymes with Orange? charts a relationship over years in fourteen scenes. Each has a title – either explanatory: ABOUT A WEEK LATER, or LATER THAT NIGHT, or thematic: FREEDOM, or TRUST, or HONOUR.  The guy (Fabio Motta) is a straightforward fellow with straightforward down-to-earth needs, wants, desires, and dreams.  The woman (played by the playwright Isabella Perversi) is conflicted, complex, evasive, and frustrated because nothing is quite as she wants it.  And that is even if she can’t quite define what it is that she wants.  Perhaps it is simply authenticity, or a sense of self.  Things he can’t give her.  The title is a kind of metaphor for them.  What rhymes with orange?

He wants children; she clearly doesn’t.  She wants a career as an actor and dancer – though we suspect she has neither the talent nor the drive to achieve that.  He eventually is forced to reveal that he’s never really believed in her ambitions; he’s strung her along for years; it was easier to indulge her fantasies.  He has dreams of ‘crazy animal sex’ – which isn’t what he gets with clearly inhibited, anxious her.  She claims to look after him – that is, for his incipient alcoholism - but the help she’s offering – whatever it is – is what causes him to drink.  She lies.  He is restrictive.  This couple seem to stay together based on a connection made when they were adolescents – the chemistry is long gone - and there is tension (or maybe frustration or impatience) for us in wondering how long they will stay together given their conflicting views of life and, indeed, of each other – which are obvious to us, but not to them.  You may recognise this situation – or trap – but do we care?  It is an all too recognisable, familiar relationship bind, explored here in convincing (if at times banal or redundant) detail.  If this summary sounds as if the text is tough on the woman, it’s written by a woman, and, less obviously, it’s also tough on the man with his low horizons, his sentimentality and his inability to recognise the woman’s needs.

But this online presentation is essentially a videoed two-hander stage play, performed on a theatre stage in front of theatre blacks with cardboard boxes as a bed, chairs, walls and so on.  In other words, it never escapes its theatrical origins in its setting or its performance styles.  We can only assume that was a deliberate choice.  On only a few occasions - split screens, a throbbing in-and-out of focus – does the show exploit the possibilities of the screen medium.  And if the play was to be videoed, why not shoot it on locations – a real bedroom, a real park, and so on?  The performances are real enough, and the text is mostly sensitive and subtle, but as an online presentation, What Rhymes with Orange? lets itself down.