When He Was Famous (Life in the Fast Lane?) by Seth Robinson 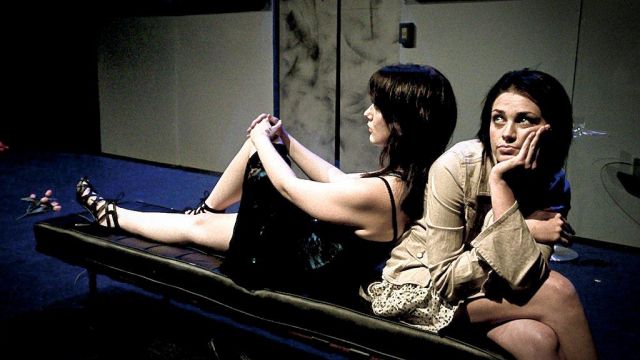 When He Was Famous is a production running during National Youth Week. Canberra Dramatics is known for its support of young people interested in theatre, and this production has involved people principally aged between 15 and 25. It is a credit to their application, talent and diligence that this play has worked well.
Patrick C. Moonie plays Robert J. Taylor, also known as Robbie, an actor of considerable reputation both in his acting and in his private life. He maintains the character’s charm despite the things that Robbie has done.
Robbie wakes up in his apartment, surrounded by the detritus of the night before, and as he tries to work through an alcohol- and drug-induced haze, he breaks through the fourth wall. This device isn’t always my favourite, but in this instance it worked, propelled by Robbie’s belief that the audience is a hallucination (maybe from the rodent tranquiliser he regularly takes). The narrative moves along at a good rate thanks to Robbie being able to address the audience directly.
Kate Fester plays Casey, Robbie’s assertive and full-on publicist. Peri McKinnon plays Michelle Kensie, a journalist plucked out of the press conference by Robbie, and who threatens Robbie’s hoped-for happiness. Megan Wickman played Elorée, a mysterious Frenchwoman. Don Wilkinson plays Don, the much put-upon bodyguard.
The set was minimalist in design, with a few well-chosen props and mention must be made of the good use of the lift doors as the entrance to Robert J. Taylor’s expensive apartment.
In one extended act, this play hit its mark on nearly every occasion and showed a consistent pace and style.
Rachel McGrath-Kerr