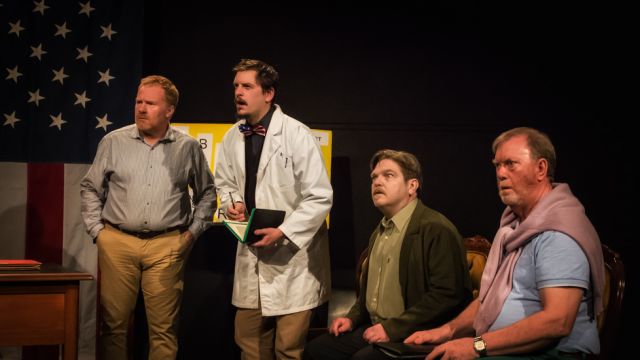 Red Phoenix’s latest Adelaide premiere is a darkly funny, divertingly offbeat, bracingly relevant vision of politics and the military, conceived at the height of the Vietnam War but set roughly at our current point in time. This unusual aspect helps make the play a shrewd selection for staging in 2017 - and with generally excellent performances from an outstanding ensemble, The White House Murder Case should prove a rewarding experience for all audiences.

The specific murder addressed in the title – while gruesome, bizarre, and undoubtedly tragic - comes to feel of almost incidental importance in the grand scheme of playwright Jules Feiffer, as the absurdist terrors – and hilarities - of the battlefield come to vividly gruesome life on one side of the stage, while the Oval Office on the other side plays host to machinations that prove to be no less fatal, and almost as blackly amusing. Tim Williams’ resemblance to a certain former US president makes for effective casting, and Anita Zamberlan Canala is believable enough in her brief time on stage as the First Lady with a moral conscience – though the accents of these performers tended on opening night to sound more mid-Atlantic than would genuine inhabitants of the White House.

The President’s cabinet here are less of a brains trust than they are a collective liability – with the irony that lab-coat-attired Professor Sweeney’s intelligent scepticism is treated by his fellow characters as the biggest liability of all. Joshua Coldwell is right-on-target in the role, while Tony Busch does a solid job as Attorney General Cole, and Wayne Anthoney’s Secretary of Defense Parson successfully embodies Feiffer’s depiction of White House strategy as feebly imprecise and befuddled.

Gary George is both ideally cast and uproariously funny as General Pratt, an unfortunate casualty of war, Brant Eustice delivers yet another deliciously complex and credible character in Postmaster General Stiles, while the invaluable duo of Robert Bell and Matt Houston are simply a sensation in their unforgettable roles; rarely has the ghastly impact of battle been conveyed with as much successful humour as these performers deliver playing Lieutenant Cutler and Captain Weems.

Music selections make their point perfectly, stage design and costumes communicate the necessary sense of place (and patriotism), while Richard Parkhill’s lighting provides the final, supportive, unobtrusive touch on a smart and spicy mixture that those who can appreciate satire ought to treat themselves to.