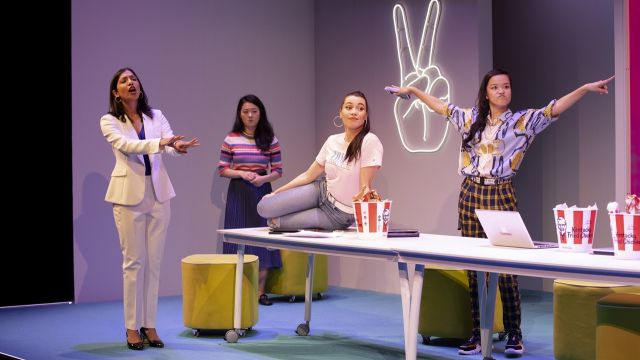 The cast of White Pearl seizes the stage in a rush of words, energy andattitude in a ‘go girls’ performance that they sustain for 90 fast-paced minutes. There is no room for laxity in Anchuli Felicia King’s fiercely modern play. Her dialogue, that director Priscilla Jackman describes as “razor sharp idiomatic specificity” and the slick “spellbinding tempo and rhythms” (Jackman again)  keep the six actors at peak pace, their characters bouncing off and at each other in a dark comedy that subversively challenges what Jackman terms “the irrefutable complexities of PC culture”.

Jeremy Allen’s set is just as sharp and cutting edge as King’s writing. Long horizontal lines are emphasised in an extended boardroom table. Tall windows mirror the audience then become transparent. Chairs are replaced by lime-coloured stools on pale blue carpet. Damien Cooper’s lighting is bright and stark. This is no place to relax, no place to show weakness. The only escape is the toilet, skilfully hidden behind a flat that elevates in specific scenes. Stretching above the stage a screen of changing advertisements is replaced in quick scene breaks by figures indicating the escalating number of hits on a leaked racist ad that has gone viral. Another projection shows an ever-increasing number of tweets.

The ad itself, about the supposed ill-effects of a skin whitening cream, is the trigger for the dilemma that faces the six characters. It provokes the power plays between them as they connect and disconnect, accuse and denounce. In so doing, it raises issues about different cultural perspectives, what people see as funny, what lies consumers believe, the fallout that comes of global exposure.

It is hard to differentiate between the performers in this tightly directed, blatantly contentious, crisply funny production. Each exposes their character with equal energy and boldness.

Perhaps Vaishnavi Suryaprakash deserves special mention for the robust physical manifestation of her rising anger and frustration, and Merlynn Tong for her laid-back nonchalance and comedic timing.

But Deborah An, Mayu Iwasaki, Catherine Van Davies and Shirong Wu’s performances were equally forceful and compelling. Matthew Pearce, as the sole male character, found the delicate balance between misogyny, machismo and humour with which King infused his character.

Though the language may shock, this play reflects contemporary issues in contemporary language with a cast that show the diversity of talent that abounds in multicultural Australia – talent that is not often enough evident in the plays that are chosen for production. See it with an open mind, but see it! It hopefully heralds a new, “New Age” theatre.