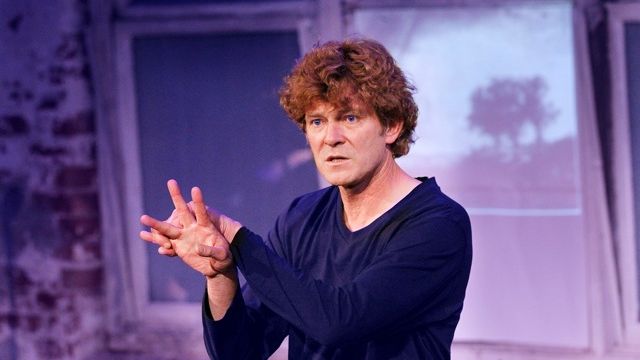 Whiteley’s Incredible Blue is the culmination of a lengthy engagement of a number of significant theatre practitioners with the poetic writing of Barry Dickens that explores the  ‘close to the edge’, drug fuelled creativity and demise of one of Australia’s most infamous painters - Brett Whiteley. This is a strange conjunction of disparate forces that results in the performance of a multifarious hologram.  At times sole actor Neil Pigot can be viewed as himself, the actor, assuming a character at yet other times, for short startling moments one would swear they are watching Whiteley prance across the stage.  Then there are moments when the voiced language and Pigot’s tenor of voice can only be that of the writer of this poetic hallucination. Sometimes there is a brash, rigid, loud masculine tone that resonates as the antithesis of the flowing lines of Whiteley’s work.

For me this performance was a mixed experience. I sat between two friends one of who expressed her delight in the work she experienced as the best theatre she had seen in a long time with pealing laughter. The friend on my left, however, having met Whiteley a number times when she worked for an art dealer, was incensed by what she perceived as a portrayal of him as a person stripped of his innate unfluctuating (no matter how bombed he was) intelligence.

For my part, throughout the short fifty-five minutes I was only really satisfied by the beautiful work of the Calvert George Fine Trio in full flight, who exquisitely conjured the spirit of a number of Whiteley’s masterpieces. This segment of the work seemed to be a judgement-less, unfettered response to the enigmatic genius that was Whiteley.