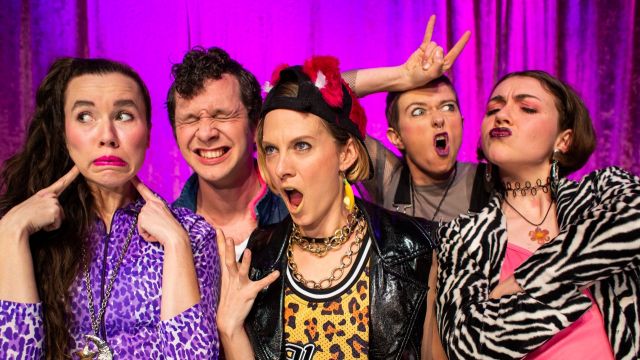 Watch this with your kids.  Please.  Kids 5-10 (that’s the target) will love this fast mix of crazy, funny, silly, rude and rough; it has weird live humans, puppets, cartoons, crazy colourful costumes, and nutty songs, all zapping across the screen at blurring speed.  This isn’t just static filming of live performance; PO PO MO CO understand and make the online thing work.  A shout out to La Mama, sponsors and supporters for getting behind this and allowing PO PO MO CO to splash out on costumes, props, music, rehearsal time plus filming and edit.

There’s a parade of many wince-making ‘auditions’ by woefully bad performers (an off-screen voice asks, ‘Where do they find these people?’), there are talking flowers, singing maggots and talking bottoms; and there is a curvy, glamorous blonde (Ell Sachs) who proudly emits farts so toxic she crushes drink cans and overwhelms performers.  What kid doesn’t love a fart joke?  For punctuation, the whole cast of just five make you think you’re looking at a wild party of at least twenty-five people when they ‘freak-out’ in an over-costumed kaleidoscopic dance number.

Lily Fish revives her Jofus of her Jofus and the Plank, but here without the plank; instead she has musical accompaniment from a very sweet rabbit (Angela Fouhy) - whom Jofus bullies relentlessly.  Poor bunny.  Kimberley Twiner sings some cod-but-punchy Country & Western numbers, ‘The Animal in Me’ and ‘Dig a Hole’ – the latter with ho-down dancing.  All this is under the direction of Ms Twiner herself, then filmed and edited by Dana Simon in fast crunch and punch style.

The premise, if one were needed, is this: a bunch of physical comedy performers are trapped (quarantined?) in a warehouse filled with props and costumes…  They begin to dress up, fool around and improvise, and the result is something that looks spontaneous and exuberant, and as if they’re making up as they go along.  The result – plus some hectic animation that looms out of the screen from Sebastian Berto – is The Wholesome Hour – which has something like twenty-seven items/gags/sketches that racket by at dizzying speed.  It’s not an hour, by the way; it’s around thirty-five minutes.  The title is another joke, a nod to the ‘nice’ children’s entertainment that was supposedly edifying for the little innocents – and, like other only apparently rough and ready PO PO MO CO shows, that’s an element of the satire - there for the grown-ups watching with their kids – or anyone’s kids.  Even my oh-so-sophisticated-and-blasé 10-year-old granddaughter fell about laughing.

Link to watch The Wholesome Hour