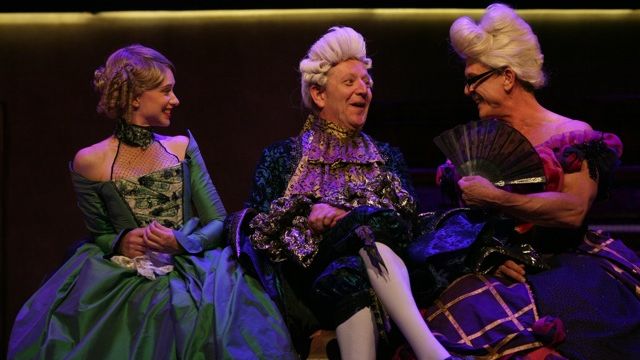 Ever fresh every year, with their endlessly inventive political lampooning, their artful mix of high and low cultural references and now a stunning new standard of musical excellence, the creators of the Wharf Revues truly deserve national awards for service to satire.

Long-term creators Jonathan Biggins and Drew Forsythe (and Phillip Scott, who this year doesn’t appear) are now expert enough performers to bring the house down with the smallest laconic gesture.  Their film sketch of Clive Palmer and Gina Rinehart singing out their mining greed from the bow of the sinking Titanic is genius.

Amanda Bishop returns, and with what will surely be our last glimpse of her Julia Gillard – here in the guise of Carmen, and this year Simon Burke joins the team. He brings musical stardom to the songs (with Andrew Worboys this time the musical director), and does a very creepy run of Tom Waterhouse commercials.

Burke also rises to the considerable challenge of capturing the rolling gait and speech of Tony Abbott as well as the shrinking Bill Shorten, here well framed as a horrified Hamlet in a public service tale of Rosencrantz and Guildenstern Instead. This embedding of political wit into bigger stories is gloriously handled in the Wizard of Oz, with a disillusioned voter called Dorothy setting off to find the brain, courage and heart of the ALP – accompanied by Carr as the Straw Man, Beazley as the cowardly Lion and Keating as the Tin Man. 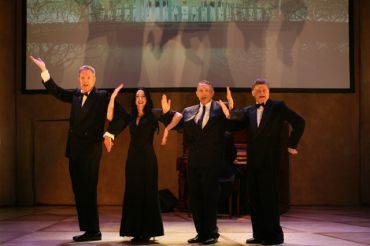 The Coalition are served up as gloating electoral winners in a no doubt quickly reworked Restoration comedy, The No Stratagem, with Bishop and Burke preening as the two Bishop Lady Libs and Biggins as Sir Petulant Pyne.  It matches a following scene where Mark Scott and other ragged survivors of the Culture Wars gather in the ABC bunkers.

Sure, the odd sketch doesn’t hit home; some puns are laboured.  But for sharp and heart-felt humour, for wit and relief from our recent political agonies, and served with remarkable production values, this is unbeatable entertainment.

Cathy Bannister and John P Harvey also reviewed the revue in Canberra, ahead of its opening at the Wharf.

Possibly because I live under a rock, I didn't realise how talented Amanda Bishop is. In this Wharf Revue she acts, impersonates, dances, puppet wrangles, sings in every style from hillbilly rock to opera with an ocker accent, and boot scoots in microshorts while cracking a whip. Of course she reprised her Julia Gillard, as a dignified Carmen in a glorious red dress, having the last word on her departure to the audience’s cheers.

Some of the early laughs are a bit forced, but it warms into the material and saves the best bits for the second half of the show. Oddly enough skits about Labor tended to be funnier. 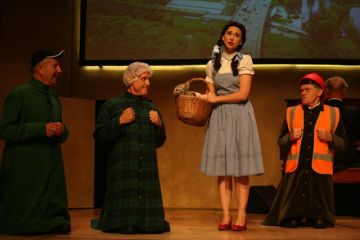 Simon Burke shows himself to be an impressive mimic, capturing that blue tongue crossed with John Wayne quality of Tony Abbott. Drew Forsythe as Gina Rinehart and whoever was unrecognisable under the layers of fat suit as Clive Palmer were a highlight, as was Bishop as Dorothy the disaffected Labor voter seeking wisdom from the Wizard Who Lived in the Lodge. Biggins and Forsythe team up as bewildered Labor apparatchiks as Rosencranz and Guildenstern in a very clever, unapologetically highbrow piece stacked with every significant Shakespeare cliché while Burke as Shorten morphs from Hamlet to Marius from Le Mis. Interestingly, they didn’t touch kangaroo poo throwing hoons etc in the Senate – maybe because it’s so bizarre it’s beyond a joke?

The Wharf Revue never gets tired. Possibly this has something to do with many politicians’ preparedness to try something new on the public.  Often that will be something transparently and insultingly mendacious; often enough, it will be something overtly disreputable; but always there’ll be something that, in the light of common sense and the hands of a skilled raconteur or satirist, will reveal, in all its naked glory, its own absurdity.

The Revue does no storytelling; it reveals not through discussion or description but by showing us another realm, one in which what we took seriously yesterday, we can nod our wiser heads and guffaw at the ludicrousness of today.  It’s pure satire.  But the various skills of its small cast are such a delight: they sing well, they dance very well, and they caricature to perfection.  There’s one point at which, in opening an act, one of the actors, without having spoken, simply stands and looks—and behold, there stands our current Prime Minister, wearing no clothes (so to speak).

What amazes its audiences every year is just how up-to-date the Revue is.  Rehearsed for months before its season begins, just a few weeks into its tour, it has taken best advantage of the most recent gaffs and most outrageous whoppers fresh off the press.  At the same time, a couple of acts in this season highlight beautifully some of the most longstanding, unchanging absurdities on public record: the Liberal Party’s increasingly entrenched self-serving psychopathy, and the Labor Party’s increasingly abject fear of attempted humiliation by psychopaths. 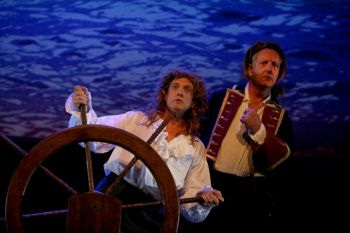 After a year in which Australia had three different Prime Ministers, there was much fruit to pick from the political satire tree, for the Sydney Theatre Company’s Wharf Revue team and they are in fine form.

The pre-city warm-up season at the Glen Street Theatre is proving just as popular as their regular digs at the Wharf.

Other Coalition characters we’ll no doubt see a lot more of in the years ahead are Bronwyn of Bushgate and Sir Petulant Pyne.

Every year one of the regulars gets a year off from performing. Phillip Scott was on sabbatical this time.

Stepping in was Andrew Warboys on the piano.

Whilst we missed the trademark Phillip Scott virtuoso song and acting patter extravaganza, it was more than made up for by the welcome addition of Simon Burke, who looked a little scary as Tom Waterhouse but more attractive in drag.

The strongest sketches targeted the women. Gina Reinhart and her ‘generous ’approach to her children presented an irresistibly ample target for the crew.

Another highlight was Amanda Bishop saying farewell to Julia Gillard through an aria from Carmen.

The Wharf Revue team these days also make clever use of video. It was used best when the Coalition Pirates needed help from asylum seekers during a storm.

The real challenge will be next year – after a year of the Abbott Family and their determination to be very dull and stay off the front page - one wonders what material will they have to work with.

No doubt Clive Palmer and the new crew in Canberra will help fill the gaps.