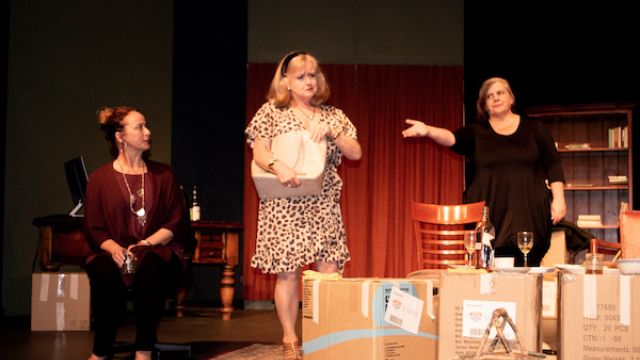 It has taken me longer than usual to write this review because I came away somewhat conflicted about Wicked Sisters.

It is an interesting play and it strikes many connecting notes with members of the audience. There are some nice ripostes and some good one-liners which lift the atmosphere and make the audience laugh.

There is also a serious side that discusses the idea of sisterhood. Are women loyal to other women? Or will they cast aside their ethics if there is a better offer? Do women really support each other or are they prepared to use their friends and sisters to get something they want?

I say women rather than men and women because Wicked Sisters has an all female cast and while many of the issues raised in the play could easily refer to both genders, in this case the play concentrates on the women. And this I suppose is part of the reason I am in two minds about the play, because I did not find myself warming to any of the characters. But perhaps that is the intent. The setting is a study in Meridee’s home in the Blue Mountains. The study is dingy and seems to be in the process of being packed up. There are constant referrals to the Mountains throughout the play but there is no view of them. I found the set dreary and uninteresting and I think it had the effect of sapping energy out of the actors themselves.

The four characters, Meridee played by Petra Schulenburg, Lydia by Deborah Walsh, Judith by April Stuart and Hester by Tracey Korsten are long standing friends. They each have a different agenda as to why they have travelled to Meridee’s home to meet up. The reason is supposedly to support Meridee through her grief at losing her husband, a famous scientist.

However, as the audience quickly discovers, there are deep divisions and some hard truths that will emerge from their conversations and memories.

Schulenburg, Walsh, Stuart and Korsten are all experienced actresses and they all perform well under the capable direction of Megan Dansie. However, my sense was that there was a lack of energy and pace in the performance, which might have been because it was a Sunday matinee when I attended and a small audience.

I also found that the tone and feeling stayed very much within a similar range for all the actresses. I enjoyed Korsten’s performance the most as she brought the most realism to the stage. She was strong, delivered ideas and one liners effectively and had developed a more memorable character.

In a key period for the company, congratulations to Stirling Players for once again putting on a thought provoking play that is a South Australian Premiere and something different to the general run of shows.